I recently watched The Incredible Shrinking Man (1957) on Chicago's WCIU, where local legend Svengoolie did his kitchy-host best, making snarky comments from an open coffin and dropping in a factoid or two. I hadn't seen the movie in many years, and was struck by how frightening it still is. I'd expected the years to have softened for me the film's sensationalistic storytelling, to have (dubiously) blessed me with ironic perspective against late 50s sci-fi melodrama. Instead, I was riveted, as I was when I first watched as a kid.

Something interesting happened to me about a third of the way in.  Robert Carey, played by Grant Williams, has begun shrinking, the unwitting victim of a radioactive mist encountered while he was sailing, but all he's noticed thus far is curious lengthening of shirt sleeves and oddly baggy pants, alerting his increasingly concerned wife Luise (Randy Stuart). He visits several doctors and learns ultimately that he's being ravaged by a kind of anti-cancer that is arresting and reversing the growth process. This is all creepy enough, but then director Jack Arnold and editor Albrecht Joseph do something remarkable: trusting the payoff that delaying the image of a tiny Robert Carey will bring, the filmmakers give us a scene where Carey is addressed while in his living room, spoken to but not seen, for a minute or two. When Arnold and Joseph finally match-cut to Carey in his chair, the effect is startling: 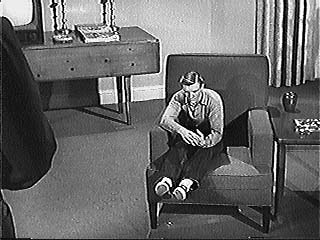 Given the odd blend of surprise and corniness, the emotional power this moment creates is staggering. The melodrama is supplied less by the edit than by a shrieking orchestral chord of dread, a minor-note clash of strings and horns (Irving Gertz, Earl E. Lawrence, Hans J. Salter, Fred Carlin, and Herman Stein are the film's uncredited scorers; Joseph Gershenson its musical director). Later images in the film are harrowing: the grotesquely huge cat playing with Carey as if he's nothing but a toy; the giant, loathsome spider in the cellar and the epic war it wages on a Carey; the emotionally complicated, Eisenhower-era-culturally charged sight of an embarrassed wife towering over her providing, shamed husband.  Yet this simple image of a devastated man sitting in an over-sized living room chair (note the large arm of the man speaking to Carey) and the corniness of an adult actor earnestly playing this while sitting in an obviously rigged set, is the brief moment from The Incredible Shrinking Man that I haven't been able to shake for decades. My chest still goes cold when I see it.

Suburban horror. When I first saw the movie as a boy on a Saturday afternoon, Carey's existential, quasi-mystic mutterings at the film's conclusion were well beyond me, and yet I somehow understood the gravitas.  ("Great art can communicate before it is understood," T.S. Eliot.) This closing monologue does not appear in The Shrinking Man, the novel by Richard Matheson published a year before the film adaptation, but was added by the director, who correctly felt that the momentum of Carey's vanishing led Carey, and by extension, the audience, to question the worth of human life, the deceptions imposed by the values of relative size (man over woman, man over insect), and the human's place in the infinite cosmos. This Naturalistic conclusion and its imagery wholly shook me—the towering suburban yard, ordinary and immense; the glance upward to the infinite heavens; talk of zeros and God and nothingness. As a kid in suburbia, the notion of vanishing was pleasant, especially during puberty, but the reconciliation that Carey makes (or, bravely attempts to make) with his inessential self, his puniness, his certain, brutal fate as food for marauding insects, was too much for me to bear. It implied a courage and vision that I could not possess. So the effect was both thrilling and heartbreaking.

"I was continuing to shrink, to become... what?" Carey asks at the end of the film,


The infinitesimal? What was I? Still a human being? Or was I the man of the future? If there were other bursts of radiation, other clouds drifting across seas and continents, would other beings follow me into this vast new world? So close - the infinitesimal and the infinite. But suddenly, I knew they were really the two ends of the same concept. The unbelievably small and the unbelievably vast eventually meet—like the closing of a gigantic circle. I looked up, as if somehow I would grasp the heavens. The universe, worlds beyond number, God's silver tapestry spread across the night. And in that moment, I knew the answer to the riddle of the infinite. I had thought in terms of man's own limited dimension. I had presumed upon nature. That existence begins and ends is man's conception, not nature's. And I felt my body dwindling, melting, becoming nothing. My fears melted away. And in their place came acceptance. All this vast majesty of creation, it had to mean something. And then I meant something, too. Yes, smaller than the smallest, I meant something, too. To God, there is no zero. I still exist!

At the time I vaguely but urgently connected the unsettling feelings this conclusion gave me to the short film Powers of Ten, which I'd recently watched at the Air and Space Museum ("The unbelievably small and the unbelievably vast eventually meet—like the closing of a gigantic circle"), and to the disappearance of the Lyon sisters in my hometown. Years would pass before I'd truly understand the import of Robert Carey's dilemma, and the bravery of his renewal.

As a Svengoolie fanatic since roughly 1980 (when he was still Son of Svengoolie), I've viewed this film several times. Modern audiences overfed on CGI and gratuitious explosions likely can't appreciate the impact of the scene you referenced. Corny, yes, but no less powerful for it. Great stuff. Forget flashy computer effects. I would rather be corn(y)-fed any day.

The closing monologue has haunted me since I first saw the film as a boy. I'm surprised it's not a "bigger deal" culturally speaking as it pre-dates and perhaps predicts the hippie revolution and it's exploration of non-Western, non-Christian ideas including reincarnation, pantheism, etc. It's surprising that such a philosophical position went unchallenged at the time. Who was this shrinking man to tell us what God thought? How dare a sic-fi film wander into "religion's territory." I would love to find someone discussing it in relationship to the ending to 2001, the space-baby (both book and movie). Sci-fi theology. Good stuff.