Every man's work, whether it be literature, or music or pictures or architecture or anything else, is always a portrait of himself, Samuel Butler—to this I add one's Lastfm music profile.

The decade-old Lastfm is a music website that, among many other features, allows me to "scrobble" my iPod and iTunes, so that whatever I'm listening to is entered in my music profile under my "Recently Listened Tracks"—updated in real time, if I'm scrobbling at home while listening to iTunes or to lastfm's Internet radio, or later after plugging in my iPod.  This provides a very cool and utterly accurate record of my listening habits and tendencies, allows me to see what my lastfm friends (many of whom are actual friends) are listening to, or have listened to, and gives me the opportunity to sample recommended playlists or to dip into said friends' libraries, opening up a vast array of artists and songs and albums that I otherwise wouldn't hear.  It's all very 21st Century, all very amazing, something that, though it's unimaginable now, will one day seem quaint or archaic, like so many lid-lifting advancements on the web.

What interests me about lastfm beyond all of this is its conspiring role in shaping persona, that is, my persona.  I'm an autobiographical writer and essayist; my persona is shaped, rendered, consumed.  Lastfm and sites like it provide a profile and recommender system that together behave as a kind of digital self-portrait.  Is this the new autobiography?  "Profile data," indeed.  Provided that I've enabled scrobbling, anyone who wants to can eavesdrop on what I'm listening to now, or if he really wants to, discover what I was listening to on, say, January 19, 2009 (among other songs, the New Pornographers' "It's Only Divine Right" and Shoes' "Shining."  Hmm, a pop day).  Remember listening to records, tapes, or CDs alone, with headphones, on a rocking chair in the rec room or up in your bedroom, eyes shut tight against the music and the world?  Through lastfm I can now invite anyone in, friends and strangers, and say Hey this is what I'm digging now do you know it do you have anything else by them who else sounds like them?

But what if I don't want you to know what I'm listening to?  The Recently Played Tracks feature is a cracked window into my life: what you think you're seeing is distorted.  As in an autobiographical essay, I'm in charge, confidently, shamefully.  I see what I want you to see.  I'll confess that I sometimes disable scrobbling if I'm in, say, a helpless Paul McCartney mood, lest I look lame; other days I say, Who am I kidding, McCartney's great, who cares if I get to "Maybe I'm Amazed" via "Only Love Remains"?  When I've been researching and writing my books over the last several years, my lastfm playlists reflected an unhealthy obsession with garage rock, rockabilly, and AC/DC.  What's wrong with that?  Nothing, save for those dark, melodramatic days when I'm feeling tragically narrow in taste and experience, and wish I had a more catholic, experimental flair.  When I was a DJ at the University of Maryland in the mid-1980s I not-so-silently sneered at the jocks who reveled in their free-form shows, segueing from the Apocalypse Now soundtrack to The Kingston Trio to Dead Kennedys out through Tears For Fears and ending with a PSA for Jews For Jesus.  Privately, I wished I was half as daring.

Like all autobiography, my lastfm profile is woefully inaccurate.

Can you tell I've been reading The Old, Weird America? 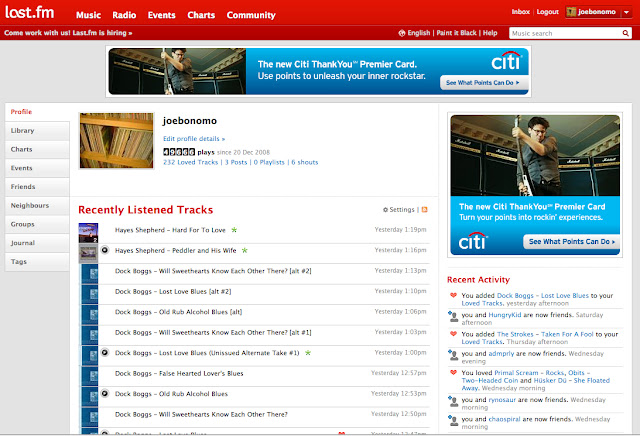 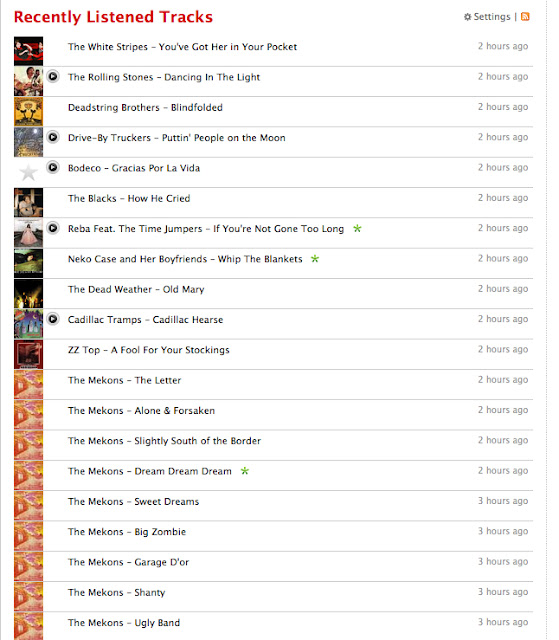 No, but wait! I listen to a lot more than alt-country Americana.  Come back when I'm rocking the Teenage Shutdown series, obscure 60s garage punk.  Or Guided By Voices.  Or the Kills. Or the Star Spangles. Or Sleepy John Estes.  Or Billy Childish.  Or....

Montaigne: Anyone who turns his prime attention onto himself will hardly ever find himself in the same state twice.

Luc Sante: Every human being is an archaeological site.

Prince: I've got two sides, and they're both friends.

A German proverb: "As fast as laws are devised, their evasion is contrived."  Although I don't feel good manipulating the truth on lastfm, the playlists that I do create—or more accurately, the playlists that I don't create, sin by omission—are no less truthful.  Anyone writing personally offers a persona made up as much by absences as by presences: the gaps and holes, the missing playlists, the playlists that exist in private in the mind, unseen, are substantial in their invented lack.  What I don't want you to see—in my past, in my fantasies, my Recently Played—is certainly as tangible to me as what I willingly disclose, maybe to you, too?  But this is all rationalizing: sometimes I'm embarrassed by my moods, by my self-perceived unadventurousness.  So tell the truth already!  But an autobiographical self is full of demurring, dissembling, Light Disclosure.  What's held back from from your prying eyes—the profile data unmined, the 1's and 0's not key-stroked—is conspicuously Me, if only a version.  I wonder what I'll feel like hearing tonight?  I'm gonna close the door.

It would be nice if it could type too....

I wish last.fm worked for me, it would save me a lot of time. I blog every album I listen to - I have a desk job with a private office so I listen to a lot of music - as well as Tv show, books, movies, but because I use streaming services primarily, last.fm doesn't catch it. So I scrobble myself by hand.

What would be handy is an app that did all the analysis I do on my blog for me, learned my reactions to what I listen to and think about until it zeroed in on an accurate, empirical portrait of which I could be a reader. A Pandora station for the soul. If it got good enough, then I could let it just feed me books and TV and music and tell me what I think about it, which then would give me a bunch of fresh material to blog about. "Look at what the robots think I like now!"