In 1981, George Thorogood and the Destroyers embarked on a tour that embodied the grinning absurdity of rock & roll.  Beginning October 23 in Honolulu, Hawaii they played fifty consecutive shows in all fifty U.S. states, ending December 11 at Pasadena, California.  I remember hearing about the feat at the time, on DC101 radio in Washington, D.C., and it lodged itself in my imagination; over the years I'd vaguely recall the event, in a kind of silent awe, and it grew to mythic proportions.

I didn't pay specific attention until 2001 or so when, researching microfilm materials at the New York Public Library while working on Sweat, I came across an article about the tour in a 1981 issue of Billboard.  There were the details in front of me: 11, 243 miles driven by Checker Cab averaging 248 miles a day, Thorogood and his Destroyers playing cumulatively before 150,000 fans.  The map proved it, or more accurately dared me to believe it: a white line pinging across the great nation from Hawaii to Alaska (on Checker Airlines?) over to Oregon and Washington and relentlessly pushing eastward in great gulps and hairpin turns and then a grand u-turn along the Eastern Seaboard and straight back the other way across the South and Southwest.  At the time of the tour I was rocking out to "Move It On Over," "I'm Wanted," and "Night Time," great early Thorogood cuts that I loved, before he became internationally famous, the happy accompaniment to beer commercials and last calls at Hard Rock Cafes, before he cashed in.  In 1980, Thorogood was still lean and hungry—though he could smell his payday—and had the nerve, humor, intestinal fortitude, youthful energy, and rock & roll ambition to embark on a 50/50 tour.  No matter what I think now of Thorogood and his commercial status, no matter how inessential his music threatens to become, no matter how rote and predictably his persona grew, this Herculean feat of rock & roll showiness will forever endear me to him.

At a Thorogood fan forum someone's posted the tour's itinerary and a newspaper article, and below is a cool advertisement (and detail)  from the December 19, 1981 issue of Billboard, a crowing congrats to the kid from Delaware: 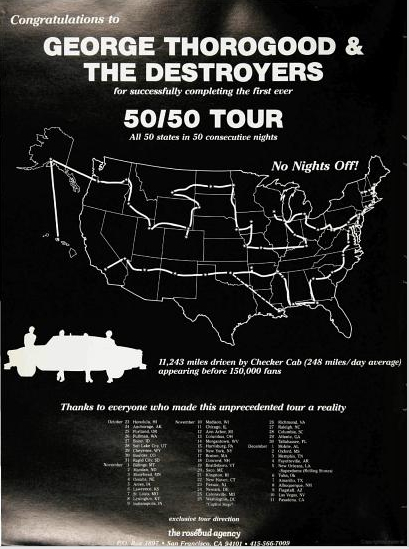 Photo of George Thorogood by Chris Walter via Photofeatures.
Posted by Joe Bonomo at 6:12 PM

It happened.
I saw him at the Kimo Theater in Albuquerque.
George lit the place on fire.
=Rich Binell

It happened.
I saw him at the Kimo Theater in Albuquerque.
George lit the place on fire.
=Rich Binell

They had us rocking in the aisles at WSU in Pullman, WA.

I was there. International banquet house, in Anchorage, AK. It was awesome!

Thanks in part to the great Checker Marathon.

Saw them at the "International Banquet House" in Anchorage Alaska. Basically just a bar. Shit got out of control towards the end though.

I saw the Atlanta show (night 38) and he tore it up. Favorite memory was seeing a guy try and stand up on top of two big Fosters Lager can and then doing a face plant. Good times!

I was in Hawaii when Thorogood kicked off the tour. They performed at the Wave Waikiki, a tiny bar in downtown Honolulu. The place was packed and the band was HOT! Hank 'Hurricane' and George traded onslaughts. We wound up standing on small bar tables, shakin' and dancing the night away. Probably THE greatest concert I've ever seen (and yes, I've attended many). Ranks in my top five concerts of all time. I was twenty-nine at the time. WOW!

I saw the final night at Perkins Palace in Pasadena, ca., which almost didn't happen because the venue had just been closed and padlocked. George, himself, and his management team were able to get it reopened for that one night so he could complete the 50/50 Tour

I was fortunate to see the show at the Troubadour in Las Vegas. Day 49! That concert remains the greatest show I've ever seen.

I agree with your assessment of the later George, when if felt like 50s plastic. But George had some good stories early on. Right before the 50/50 your he and Heart fronted some Rolling Stones dates. He worked his butt off at the gym to get ready for the tour.

He also owned and played semi-pro baseball in Wilmington, made rookie of the year if I recall. Band made him quit though.

Verified a story I'd heard back in the late 70s, from Jimmy Thackary in 2004, about the Nighthawks and Destroyers were playing bars across the street from each other in DC and George & Jimmy met in the middle of the street and exchanged places in the bands.

5 year old waited to take a picture with his singer of “Bad to the Bone” to be turned away!!!! He and his people suck! What a horrible memory for my my baby! Bastard! To him and all who represent him!

I saw him in Amarello Texas I’m at to her Stevie Ray Vaughan and double trouble opened for George. It was at the Texas Moon Palace a converted rollerskating rink

I was at the Boston gig, the ballroom of the Bradford Hotel. Management cut the power at 1am to get 'em off the stage. Magic.