Who Will I Be 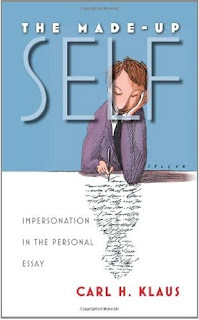 I just finished Carl Klaus's thoughtful The Made-Up Self: Impersonation In The Personal Essay.  When a writer claims that he's writing autobiographically, Klaus argues, what he's really doing is creating a persona, a version, or more often versions, of himself.  What Klaus doesn't explicitly say is that all personal writing should bear the tag "Based On True Events."  Are my essays simply made-for-TV recreations of the past, filtered through changeable aspects of my personality?  Of course.  Klaus asks a lot of good questions about authenticity and honesty, looking at autobiographical work from Montaigne's many selves to Nancy Mairs's brutally vivid self-portraits.

Klaus is most interesting when he discusses affliction writing, a veritable cottage-industry now (think Survivor Memoir, Abuse Memoir, Malady Memoir, etc.) but a relatively new phenomena in arts and letters (which I was reminded of by reading the obituaries of Betty Ford, who shocked the nation in the 1970s when she spoke candidly and vividly of her physical ailments).  Klaus writes:


Given the hunger of such essayists to convey "the most intimate and interior dimensions of self," I've been tempted to call their pieces confessional or intimate essays....  I'm inclined instead to think of them as "existential essays," especially because they are so concerned with exploring, expressing, and embodying the self in some of the most pressing circumstances of its existence

Perhaps the contours of one's life — personality, character, Bergson's past leaking into the present — come into sharpest relief when one is standing at a precipice of sorts: physical, psychological, spiritual, etc.  I'm not convinced of this, as it would nullify much of the writing of what the mental health industry terms statistically normal people, and their genuine urgencies and conflicts.  Klaus doesn't discuss gay/lesbian "coming out" memoirs, another sub-species of autobiography that has crowded bookshelves in the last couple of decades, but there too, when artfully essayed, are selves most often forged in "pressing circumstances."  This will likely change in the coming years as gays and lesbians continue to be accepted, legislatively and otherwise, into the mainstream.  If one goal of the personal essay or memoir is to explore the limits of self and the shifting demarcations of personality, then a statistical minority's honest attempts at this have a kind of built-in urgency, perhaps even drama.  This urgency can be squandered, of course, with poor writing, ungenerous character, and shallow thinking.  And the urgency can become slack if the cultural circumstances that created it vanish.

I've thought a lot about versions of the self and the tools we use to create them, recently here and here.  Klaus's observations remind us of the fascinating problem of self-manipulation in the hands of the personal essayist.  I've often felt that the window-at-dusk is an apt metaphor for the personal writer: we look out the window in an attempt to see and dramatize the world and we notice ourselves reflected back, ghostly but stubbornly.  It's more accurate to say that we write in a hall of mirrors.
Posted by Joe Bonomo at 10:23 AM

Email ThisBlogThis!Share to TwitterShare to FacebookShare to Pinterest
Labels: Autobiography, carl klaus, Memoir, the made-up self