Looking into the past with Jason Powell

Recently, a friend showed me the work of Jason Powell.  In his series Looking Into The Past, Powell photographs sites in and around the Washington D.C. area while holding between his camera and location a physical photo of the same spot taken in an earlier era. Most of the archival photographs he uses free of charge from the Library of Congress.  The result is at once a painstaking recreation of a lost time and an illusion. 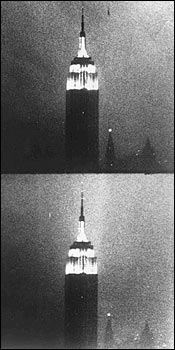 What's interesting to me is the way Powell's work conflates two subjective documents of reality.  Photos are, in a sense, deeply flawed artifacts.  Do the flaws compound in Powell's yoking-together, or do they cancel each other out?  Any photograph is a selection of reality — that selection governed by many things: style; taste; desire; weather; limited or exclusive access.  Perhaps a story-to-tell.  And that story is itself ruled by the subjective point of view of the teller: I've come here, drawn perhaps by something larger than myself, to tell this story about this place, but I'll wait until x, y, and z are out of the frame.  Even Warhol's film Empire — an eight-hour continuous shot of the Empire Sate Building, ostensibly an objective recording of existence merely existing — is composed of its author's tendencies: it's in slow-motion; it's filmed from a particular floor (41st) of a particular building (Time-Life); it started in the middle of the night (2:42 am), its very stubborn presence the result of a unique artist's Post-modern vision.  Attempts to photograph or film an location are governed by infinite subjective choices, some conscious, some not.  Even the spontaneous snapshot aesthetic is bound to this.  So, Powell is presenting a particular recreated past, one that begins in the present of his choice; overlaid are choices made by another.

Powell's work is fascinating for the juxtapositions he discovers (creates).  One of my favorites is a shot of F Street in Northwest Washington D,C, a favorite area of mine as its where the old 9:30 Club stood; the particular location in Powell's photo is the revamped "crack park" at Ninth and F Streets.  This area is unrecognizable to me now, gleaming new buildings, robust industry, and a thoroughfare having long replacing the blighted Old Downtown.  Powell's created image renders this well.  Another favorite is "Newsie, Willard Hotel, Washington, DC," the created image here a superimposition of a young boy in 1912 selling newspapers ("He and his brother are said to have a large clientele among ambassadors and senators") in front of the old hotel, a trolley car moving behind him, his small face peering at us through a turbulent century's worth of urbanization, change, and history, a little kid locked in time visiting a present that he'd be dwarfed by in more ways than one.  I'd love to know the headline of the paper he's selling.  It's a touching and brilliant image.  Another moving photo is "March On Washington, August 28, 1963."  Powell lays on top of an ordinary shot of tourists milling about the Mall an image of a large political demonstration, history's ghosts momentarily occupying the space where, the photographer implies in his accompanying commentary, many forget the progressive gains that have been made.


What's staggering to consider are the differences that would have occurred had the photographer of the past, say, snapped his shutter the following day, or simply sneezed or coughed before he took his picture, the young newsie's expression metamorphosing in that brief but eternal moment, a very different story now; if Powell had taken his photos in different circumstances, the parallel story that the present tells might've been markedly changed, as well.  Powell's work combines a selected past with a selective present.  We live in an infinite kaleidoscope: the over-matched photograph lies about that.  Powell seems to be wrestling with the ways that deceptions might be combined to tell new truths.


Two frames from Empire via Wiki.
Posted by Joe Bonomo at 4:35 PM

Email ThisBlogThis!Share to TwitterShare to FacebookShare to Pinterest
Labels: jason powell, looking into the past, memory, photography, washington dc

You've hit the nail on the head with this piece. There are quite a few shots where I intentionally wait until the modern day scene complements the original photograph in some way. I did a shot of Ford's Theatre not too long ago, and the one I chose to show was the one with the tour bus in the frame, because that's essentially what that block is now. The March on Washington shot would not be the same if there weren't people surrounding me. Sometimes, though, I just plain get lucky and there will be a car or something that echoes an element of the original photo that I don't notice until later, and I'm always very happy when that happens. Thanks for your post!

Good stuff, Jason. It's interesting what happy accidents can reveal, isn't it.