Among the apps that I've been provisionally fooling around with on my iPhone is Hipstamatic, which allows you to take square photographs and then to apply software filters to vintage-up the image.  Hipstamatic's everywhere now (on Facebook, etc.), and I haven't experimented much beyond the "lenses," "film stock" and flashes that come bundled with the app (there are, of course, plenty to buy from Apple).  The instant-vintage retro trend's a bit annoying: one of the film/lens packages you can purchase is the Williamsburg HipstaPak, and I'm not sure that Hipstamatic is being funny-knowing there.  But it's pretty fascinating too, especially in terms of nostalgia and the New Memory.

Every generation fetishizes, simplifies, and sentimentalizes previous generations, decades, and eras; such willful and wistful retelling and reclaiming of the past is fundamental to the human condition.  But Hipstamatic and other like software, behind the sneer and shrug of irony, allow you to simplify and sentimentalize the present moment.  The instant-vintage illusion is evidence of creative software writers, but the term "instant-vintage" (mine) speaks to the charms and dangers of manufactured nostalgia.  Pose your friends, flip on Hipstamatic and the Dream Pop Flash, and there you are, washed-out buddies in the early 1970s waiting for the arrival of the Volkswagen van with its smiley face flower decor.  All in good fun?  Sure.  It's cool to photograph something and retro-fy it all at once, especially if the subject of the photograph is something or someone of-the-moment, such as a 4G iPhone or a Tumblr page or your current girlfriend.  Kind of like imagining Laurie Petrie rocking out with an iPod, or dressing up Munch's The Scream in a Sarah Palin t-shirt.  (Where's Winston Smith when you need him?)

But there's something a little troubling about this, too.  In an age where we grow up unable to distinguish memories of an event from the photographs and video of the event, a dilemma exponentially more present with the current explosion of video phones and image-sharing, photo software that allows to instantly render an image vintage might further confuse things.  Does Hipstamatic devalue memory, downgrade it to a smartphone application, or does it, and the generation of thought and conception behind it, elevate the past, worship the past as something that we should want to spend money on to allow us to give it to ourselves even as we speak, click, send.

William M. Ivins, Jr. wrote, "Photography, from being merely another way of procuring or making images of things already seen by our eyes, has become a means of ocular awareness of things that our eyes can never see directly."  Yeah, and I wanted to see what happened when I sent some genuine vintage photographs through Hipstamatic's arch retro filters.  Here are three family snaps from the Spring of 1974, the first of my childhood dog, the lovely mutt Molly; the second of my family (me and my four brothers and sister [I'm the one looking disconsolate — or is it afraid? — at the top of the ladder]); the third an image that I hold immoderate and boundless affection for, one of the few images from adolescence that's on permanent rotation in the mental slide library: a shot of the crab apple tree in our front yard with my sister posing beneath in her Easter Sunday dress.  This single shot has become for me a kind of master image for the Spring, the enormous tree exploding reds and pinks to all corners, the April sun nearly washing out everything in its benevolent appetite, my pre-teen sister posing demurely beneath the day's green machinations, overwhelmed pictorially by fecundity and warmth of a suburban Sunday. 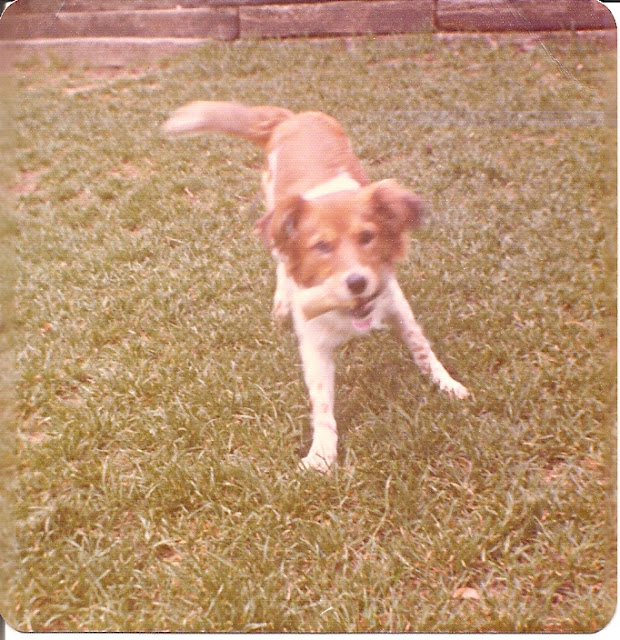 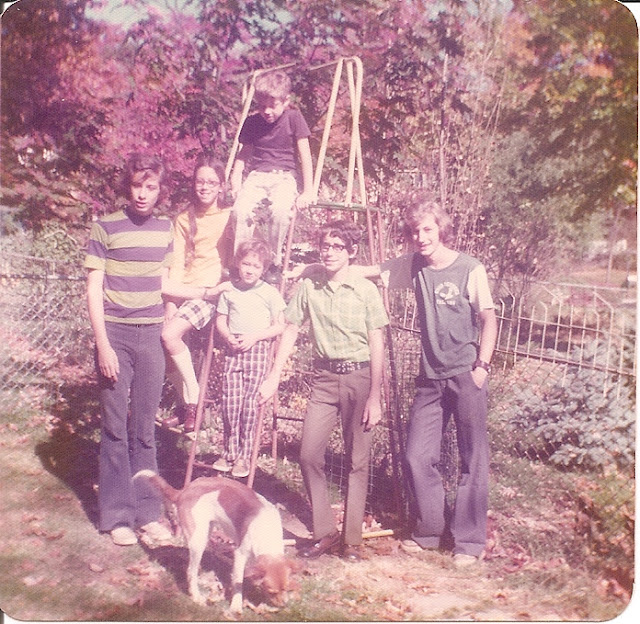 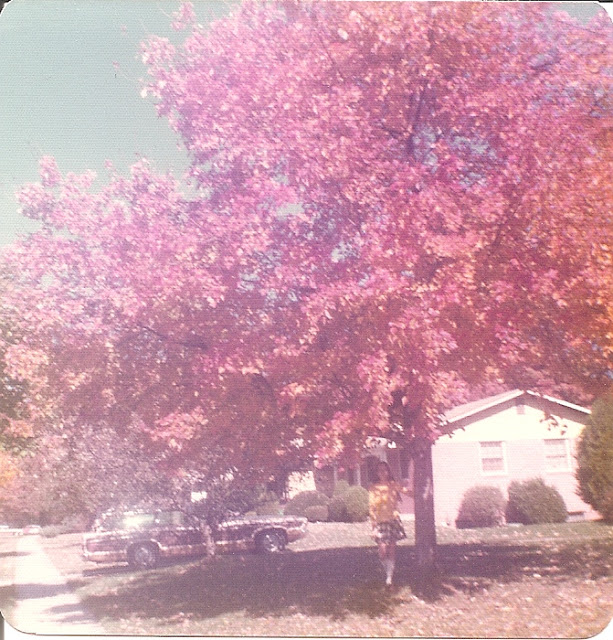 Using Hipstamatic, I took a photo of each of these photos against a white background.  The effect was interesting.  The blur of light at the top right corner of the image of Molly resulted from a bend in the photograph; beyond that, Hipstamatic didn't do much to my dog.  However, in the second and third photographs the lenses and film that I selected (Kaimal Mark II lens and Kodot XGrizzled film in the second; Kaimal Mark II lens and Ina's 1969 film in the third) cast the original photos into another dimension: faux vintage steeped in the past.  Odd, and interesting, but strange.  What occurred was a kind of advertisement for my own past, how the mid-1970s looks as reimagined by contemporary software engineers.  My family is now iconographic, anyone's, and my sister a type of girl from the decade.  Much of the personality and character in the photographs is curiously drained, for me anyway, when the filters are applied, perhaps as a result of the software's bleaching effect.  When a photo from the past is run through Hipstamatic, the photo is rendered generic.  What does that say. 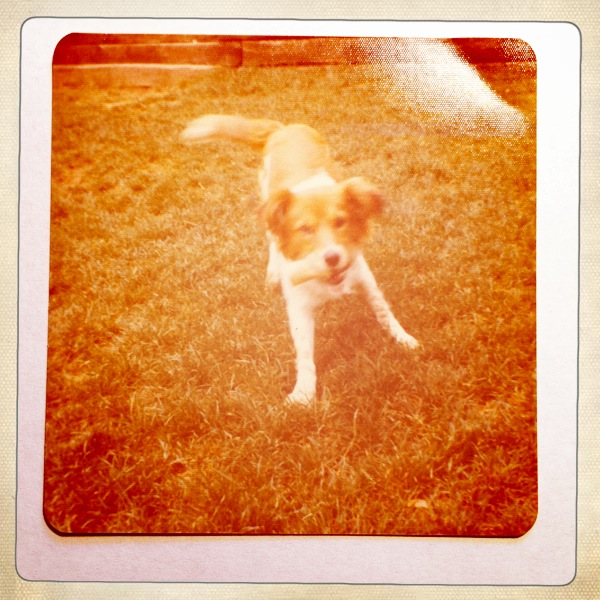 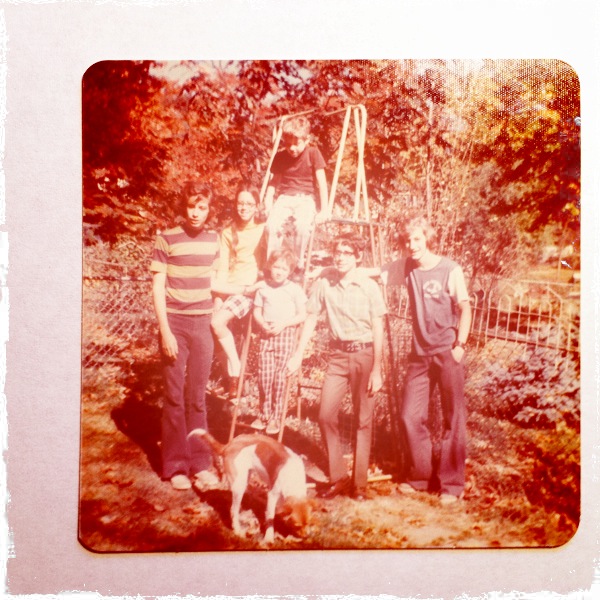 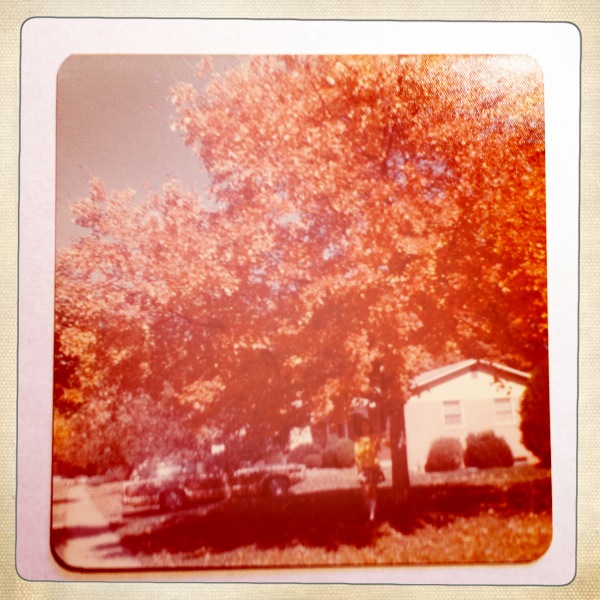 Lou Reed: "I don't like nostalgia unless it's mine."  Now I wonder: in the future, when I call upon one of these three memories, which image will I see in my imagination, mine or Apple's?  The actual past or the story that technology tells (told)?  We recreate our memories continuously, so maybe Hipstamatic is simply giving us another, inevitable, tool with which to do it.

Can think of my current HP Laser Jet P2055dn printer nostalgically in the present?  I likely will one day; who knows how we'll be printing documents in the future, maybe the very idea of paper will be ludicrously dated.  I'll miss my printer, then, in a kind of sentimentally indulgent nostalgia for a simpler time: god I miss that machine, cords, paper, ink, such innocence lost!....  Courtesy of the Kaimal Mark II and Ina's 1969, I'll let Hipstamatic do the instant nostalgia for me: