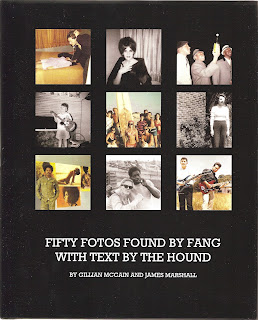 A found photograph contracts and at the same time expands, confined to the moment of its composition while possible narratives endlessly play out in our imagination. That's the fun: to end up accidentally in someone's home and be allowed to speculate as an outsider, to create fictions, to fill in the blanks. Finding a photo of strangers, who are sometimes in strange positions doing strange things, reminds us that history is never simply the background against which things occur; history provides the tableaux within which people live and act as products, as well as producers, of history. We look at a found photograph from an older era and, if there's no date-stamp, make plot-line guesses based on hairstyle, clothes, color of the shag carpet, shagginess of the shag carpet, the make of the car out the window in the driveway. Who's President?, we wonder. What's on Top 40? How have the people been shaped by history? Do they fit in to their times, or do they rebel? One can speculate wildly, but all speculation is tethered to the very real — and, in its own modest way, historic — stuff in the photo. The figures in found photos are redolent of an era because they're living it, right there in front of us, their anonymity endlessly curious.

Fifty Fotos Found By Fang With Text By The Hound is a new book produced via Blurb, a print-on-demand publishing site. "Fang" and "The Hound" are the sobriquets, respectively, of Gillian McCain and James Marshall, married writers and New York City chroniclers of pop culture. McCain is probably best known as the co-author with Legs McNeil of Please Kill Me, a standard-bearer of punk rock oral history; she's also published books of poems. Marshall, a music writer and historian, was for many years a DJ at WFMU and is co-owner of the Lakeside Lounge in Alphabet City in Manhattan. Since 2008 Marshall has been producing TheHoundBlog, a terrific resource of forgotten histories, obscure artists, and all things R&R, Blues, and R&B (and sometimes film), the seamier and less-celebrated the better.

The photos in Fifty Fotos Found originally appeared on Marshall's blog, with commentary by Marshall and enthusiastic readers. McCain and Marshall selected the photos and comments wisely, and they've produced a great book that's funny, haunting, and weird. The snaps "tend towards the vintage Afro-centric, fucked up kids, and cultural aberrations," Marshall told me, adding "these tend to go well with the blog in general." If a single found photo can be a time capsule, a book of them becomes a time mansion with well-lit and dim rooms, both crowded and sparse, wherein denizens of a century prowl, few known beyond friends and family, nearly all forgotten, nearly all fascinating. Marshall's text amounts to humorous stabs at narrative and cultural context, and many commenters pick up the thread and run with it, sometimes providing helpful clues, sometimes out-and-out answers. (Disclosure: one of my comments appears in the book.) McCain's taste runs along the line of anonymity from the margins of African-American urban life to the bedrooms of white suburban teenage girls; many photos evoke music, from unknown wannabe rockers in duck tails or feathered-hair (depending on the decade) to one snap of the Rolling Stones themselves, taken during an early American tour, a pic no-doubt heartbreakingly pined for by the photographer. Many of the photos involve man-boys posing in faux toughness. Just as many feature young girls practicing their own cultural positioning.

One of my favorite photos is of a young girl posing before a big night out. From February 1962, she's an iconic pre-Beatles dame all dolled up, beehive and heavy mascara, "a cross," Marshall writes, "between a sixties Italian film starlet and Vampira." She's beautiful, but mannered, "sophisticated" but innocent, pretending toward glamor. And she's a nobody—I mean, she was somebody's somebody, but to look at her nearly half a century later is to see an anonymous member of a long line of pretenders, a young girl playing Hollywood or Broadway starlet, or maybe fooled Mafia wife. Of course, she could've been the real thing, a member of the elite class, so then why does my imagination paint a bleak background for her? Maybe that's the fate of found photo figures who aren't obviously in dire straits: their homelessness now suggests melancholy then, accurate or not. Anyway, she's in the center photo in the top row on the book's cover as well as inside, so guileless they named her twice.

"Usually, Gillian shows me a bunch of pictures and I pick the one that makes me laugh," said Marshall, who credits the book's coming together to McCain and her assistant, Megan Cump. McCain bought her first photo at the Rose Bowl Flea Market in Pasadena, California, around 1998. "First and only time I've only been there," she told me, "and I haven't stopped collecting since." She hasn't counted her collection in a couple of years, but estimates that the photos number close to three thousand now. What it is about found photos that appeals to her? "Their humor, mystery, beauty, hues, sizes, scars, cultural references, human dynamics, history, melancholy," she says, adding, "And someone's family considered them garbage!" She hopes one day to stumble upon that mythic Great Found Photo, "the one with a secret history—the Manson family at Spahn ranch, or a meeting of the Symbionese Liberation Army!"

("Taking pictures is like tiptoeing into the kitchen late at night and stealing Oreo cookies," Diane Arbus)

A few pages from the book: