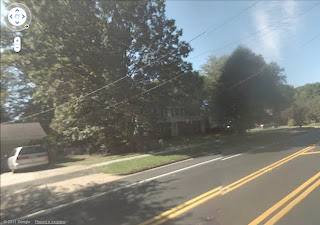 A boy's walking home — from school, from the mall, from his friend's house, it doesn't matter.  Let's follow him via Google Maps.  Use Street View.  There he is, his head bent down a bit, his fists lightly tapping a beat against his thighs.  In his head he's dreaming of girls, bike rides, heroics, a new past, a different future, another house, cousins he undresses, friends he swears at, bullies he pushes over, nuns he warms to, priests he fears, parties he attends, parks he kisses girls in, being taller, being different, dirty books, being true....  Watch him on Google Maps, though you'll have to strain to see him because he's not there.  But he was, and he will be.  Right now the sun in sweeping rays renders him invisible.  In his head he's dreaming.  When he arrives home, he walks through the front door and into the kitchen outwardly unchanged.  The lives that became truths, the wishes dramatized, the reality only in his head — how is that not also his truth.  And what of the man who remembers him now?

That night after homework, and maybe a little Monday Night Football, he's in bed and the buses rush past outside and the cold of late fall sneaks in through the window and in his head, wrapping his daydreams in a kind of protective gauze, is a feeling, a sensibility, an intuition, a foreign language — murmuring, really, in something that feels like language but may be fever or another dream or a fantasy, an outlined grown-up talking at him with a familiar face but a silent mouth moving, a kind of knowledge just past his fingers some of which he doesn't understand at all man seeks to escape himself in myth and does so by any means at his disposal drugs alcohol or lies unable to withdraw into himself he disguises himself lies and inaccuracy give him a few moments of comfort as soon as the glimmer arrives it goes, and he's back to the petty sorrows of an alternate life.
Posted by Joe Bonomo at 6:29 PM