I first saw Chris Milk's video for Arcade Fire's "We Used To Wait" when the video went live last fall.  Like many viewers, I was taken with its boldness, uniqueness, playfulness, and mystery.  I held off writing about it for a number of reasons, not the least of which being that I didn't want to be in the middle of what I was certain would be an avalanche of online commentary.  But The Wilderness Downtown didn't receive quite the viral reaction I thought it would, and that surprised me.  Everyone should see — participate in — The Wilderness Downtown.  In dramatizing the past it's opening up the future, as well.  What enamors me of Wilson's interactive multimedia video is the way it both personalizes and universalizes memory, the act of re-presenting one's past.  Though I'm somewhat wary of the video's technological showiness, I'm also fascinated, and as a writer, humbled; I'm skeptical, and I'm converted.  For the time being I'm giving myself over to Wilson's HTML5 reinvention of memory's parade.  And I'm marveling.

As the site makes clear, The Wilderness Downtown works optimally with the newest version of Google Chrome and a strong computer processor; the experience of watching is definitely enhanced if all of its moving parts are moving smoothly.  Milk's premise is simple, ingenious, and of the era: using data collected and stored by Google Maps and Google Street View, he incorporates any address into the song's video narrative, not simply by referencing it in some clumsy Web 1.0 way, but by utilizing its multiple images as an embedded part of the shifting, many-windowed content.  It's a kind of narrative mashup using the personal and the public, the private and the derivative, and it feels very 21st century.  The pictures and images of the past that one holds dearly in one's memory and imagination, even if — maybe, especially if — they differ heartbreakingly from Google Map's tyrannical insistence on documenting change, appear and disappear, becoming recombined, modified setting for a boy's roaming restlessness.  The effect is a fascinating blend of grief (my past is history, and someone else is appropriating it), false nostalgia (that's my childhood block, not his, and it looks so different), and wonder (that's my childhood block!).  You're both at a remove while watching your past become someone's setting and intimately involved while watching your past become someone's setting.

Type in an address (the site urges you to use your childhood home, which is what I did) and watch as a lonely kid — hooded, anxious, driven — runs through a nameless suburban landscape, as "We Used To Wait" plays:

Soon, an aerial view of your neighborhood appears, and is slowly zoomed on, and subsequently offered from different angles and perspectives; at one point, the boy, though winded, spins in place to take in his setting, and your own neighborhood spins with him, becomes, impossibly, his perspective.  The feeling is strange, a kind of doppelganger effect.  This can't be Amherst Avenue, yet it is: 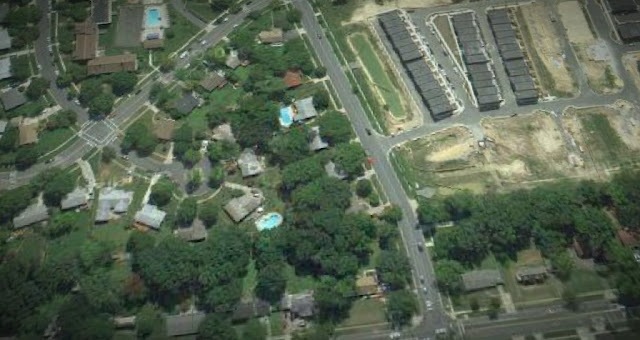 Midway though the video, you're encouraged to write a note of "advice to the younger you that lived there then."  (Later you have the opportunity to share this "postcard" online): 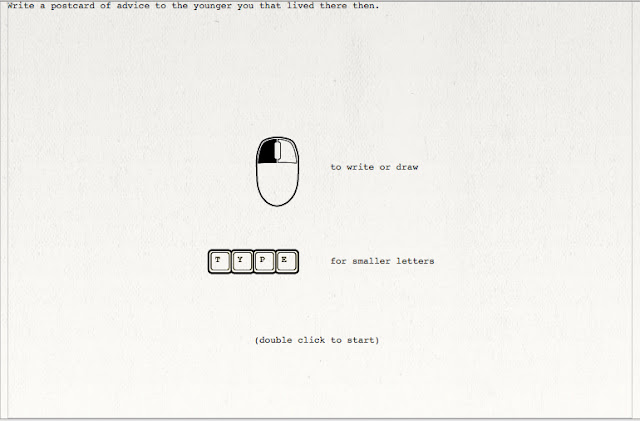 On many smaller simultaneous screens a new video of the running boy appears, as random images from your neighborhood (again, courtesy of Google Maps) flash on the screen: 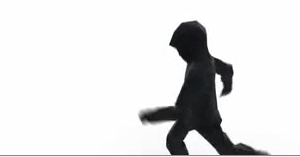 As the boy continues running, birds fly overhead and dive bomb the boy's terrain, as trees begin exploding from the ground, and multiply: 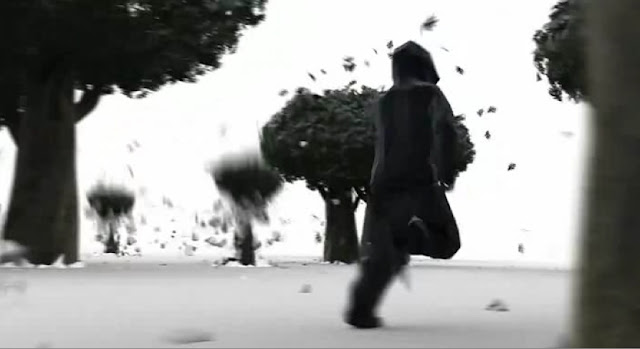 Eventually the aerial view of your neighborhood reappears as trees take over the landscape in abandon: 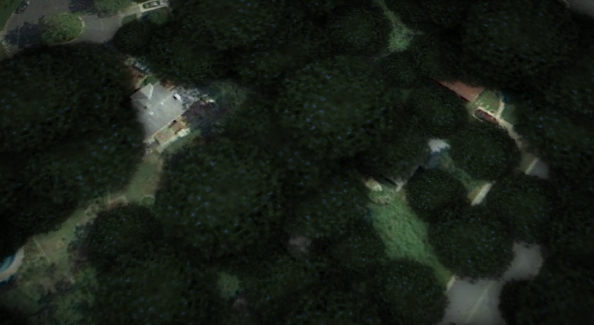 At the video's release, Milk was asked by Flux what attracts him to interactive technology:


My real motivation comes from my quest to make videos approach music’s soul-touching, emotional depth and resonance.  Honestly, I’m not sure they really ever can.  Music scores your life.  You interact with it.  You sing along to it in the car.  It becomes the soundtrack to that one summer with that one girl.  Music videos are very concrete and rigid, they don’t allow for that emotional interaction.  It’s more of a forced perspective of what a song should look like.  That makes me sad because I love music videos as an art form, but I’m uncomfortable pushing my own perspective of a song as some sort of definitive visual.  So these are experiments.  I’m not saying “this is the way.”  I’m just trying to figure out if there even is another way.

Ten years ago, Lauren Slater wrote Lying: A Metaphorical Memoir which, though belonging to a tradition, pressed a kind Reset Button for memoirs.  Milk might have done something similar.  I don't know if The Wilderness Downtown is the future of narrative writing or of memoir, but it feels like an urgent new strand that autobiographers should pick up and follow — to dismiss, if they wish, but to reckon with.  I might be embarrassed by my enthusiasm for this video in the near future; as online technology and aesthetics continue to advance, The Wilderness Downtown will look a lot less sophisticated and mind-blowing than it does now.  Future tech creakiness is a given; what's less certain is whether what Milk has created will continue to feel urgent as a 21st century memory machine.  I hope that when The Wilderness Downtown's curtain is inevitably pulled aside what's revealed is "another way" that still feels fresh, an engine that still surprises.


Photo of Chris Milk via Flux.
Posted by Joe Bonomo at 8:15 AM