In July of 1976, the Air and Space Museum opened on the Mall in Washington D.C., one of many federal events heralding the country's Bicentennial.   My excited dad — an IBM engineer who worked with NASA, and a mathematics devotee — brought the family in from Wheaton to visit the following month.  The photos he or my mom snapped that day are oddly, and brutally, under-lit — must've had something to do with the dim interior lighting at the museum, or more likely with a camera snafu that irked my dad.  The thick haze which permeates the photos feels retroactively appropriate three and a half decades later, not only as a visual equivalent to the gauzy curtain of memory and a vanished childhood but because I experienced something that afternoon that drew a kind of curtain around me. 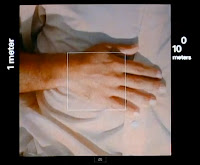 Among the exhibits at the museum was Ray and Charles Eames' nine-minute documentary Powers of Ten, a film that explores the relative scale of the universe by journeying across it in powers of ten, moving outward from earth to the edges of the galaxy, and then back, into and through the human body.  The film ran on a loop at a small, wood-paneled kiosk outside one of the main exhibit halls on an upstairs floor, as I remember.  Wandering around, probably on my own, I came across the display and took note of a small, obviously interested crowd gathered; weaseling my way in among grown-ups, I started watching.  What I saw captivated me immediately: the narrator's voice was dry but friendly, not intimidating or school teacher-y, and at the point that I started watching the film we seemed to be out in the cosmos somewhere.  Cool!  Yep, cool, but soon vaguely unsettling, and then weird, and then amazing, and then scary.  I stood for what felt like an hour watching the Powers of Ten loop, hooked on the trip from a Chicago couple dozing on the grass near Lake Michigan out to the infinite reaches of outer space, and back again and then into and under the surface of the man's hand, probing relentlessly toward his basic cellular makeup, the randomness of protons madly humming and humping and colliding and reacting, an unreal but obvious universe inside my own body....

Struck, I watched the loop again and again, quietly disappearing, awaiting my no-doubt searching parents, a kind of cosmic journey that tattooed me forever:

What I remember most profoundly that afternoon was the image — the proof — that the inside of the human body looks virtually identical to the furthest reaches of the universe: black, endless, chaotic.  It was astounding!  I stared down at my own small hand, imagining the infinite darkness inside of it, and I reeled.  It was overwhelming at that age to consider the molecular makeup of my own body, that things I couldn't see inside of me were reacting and going on all over the place, buzzing, storming, colliding.  I entwined the parallel images of the dark of outer space and the dark inside my body without understanding the science of it — in fact, the film was mostly beyond my rational understanding, though I don't recall ever being bored.  But something struck a chord in my kid imagination, before language: my body is an imitation of the universe writ small.  It was heady stuff, half-understood, promptly shelved away once I hooked back up with my family and we departed, visiting other museums, and then left the city.  I returned to suburbia, baseball, bike-riding, and the Beatles.

But something enormous lodged inside of me, waiting for maturity and knowledge and language and the imagination to approach its heft in scale.  Many years later my girlfriend said to me, Think about it, everything that happens in the body happens in darkness, and I was brought back to that day in the Air and Space Museum when I became infinitely large and infinitely puny, and began the struggle to make sense of that.

Happy faces, two brothers.  Yeah, it was a fun day.  But something pretty enormous and humbling was seeded in me, something between rational and irrational and between real and surreal — I don't matter; I do; I'm a speck of a speck within the cosmos; I'm unique and individual.  Once, during dinner, my mom fled the table when talk among by siblings and my dad turned to infinity.  I think of her upstairs in the bedroom, her ears shut against the imponderable.
Posted by Joe Bonomo at 2:35 PM