DOWN AT THE ROCK & ROLL CLUB—I saw The Parting Gifts at the Empty Bottle in Chicago last night.  The band was ramshackle, a little ragamuffin, cute, under-rehearsed, and a lot of fun.  Maria "Poni" Silver from The Ettes laid down a grooving and driving rhythm, and Dave Amels (of Reigning Sound and the Jay Vons) sat in on keyboards, providing texture and a bed to the melodies.   Lindsay "Coco" Hames was a bit of a surprise to me; I hadn't seen her perform before and she seemed a bit more shy and coy than I would've expected.  Maybe that's her thing.  And it might have been my vantage point, right near the stage under the speakers, but her voice was a bit thin, more helium-cute than the womanly-wise of her recordings.  But she was great, and she looked great, and smiled and held her tambourine like a good luck charm, and was clearly having a good time.  All in all it was a loose and fun night. 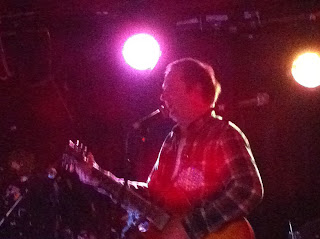 I came to see Greg Cartwright, who is one of the great rock & roll songwriters around.  I hadn't seen Cartwright live yet (shame on me) and so didn't know what to expect.  Dressed in a flannel shirt, ripped jeans, and deck shoes, he looked like a fan at the show who'd been given a chance to jam onstage for a bit.  Or he looks like Bob Mould's little brother.  Either way it seemed right to me.  Turns out Cartwright and I had stood near each other at the bar earlier; I'd thought he was a patron.  Onstage, Cartwright is friendly, loose, and intense, a strange blend of personality and talent that works to both intensify and deflect attention.  What I love about Cartwright's songs—dating to his days in the primal Oblivians, but more so in his recent work in the great Reigning Sound, the Parting Gifts, his album for and with Mary Weiss (Dangerous Game), and his solo material—is the way he reinvests genre with genuine feeling, recognizing the limitation of pop songs as something to happily argue with, not respectfully surrender to.

Much has been written about Cartwright's love for pre-Beatles, Brill Building, Girl Group sounds, but he is no revivalist.  There's passionate sincerity in his best work—"I'm So Thankful," I Walk By Your House," "We Repel Each Other," "Your Love Is A Fine Thing," "Sour And Vicious Man," "Dangerous Game," "Stick Up For Me," among others—all the more remarkable, rewarding, and pleasurable because the rawness is in service to classicist pop structures, where each aids and abets the other, creating something new and vibrant, real heart-beating stuff.  And his voice is superb: hoarse but melodic, intense but controlled, capable of evoking the pain of heartache and the disorientation of aimlessness at once.  I hear the soul and history of raw Memphis in his voice—he was born in the River City—but that could be my own wishful, sentimental ear. 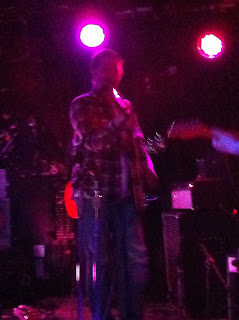 Cartwright writes a lot, but his work is remarkably consistent.  That's where his love of Pop and Rock And Roll serves him well, as reliable templates within which he'll move around, finding a 21st Century voice in Phil Spector's idiom.  Especially cool are his takes on Rolling Stones demos from the infamous Metamorphosis album, tracks that Jagger/Richards penned early in their career for other artists, in hopeful submission to pop formalism; Cartwright takes "I'd Much Rather Be With The Boys" (on Reigning Sound's Time Bomb High School) and reimagines it less as made-to-order songcraft than as a genuine complicated admission of adolescence.  The Parting Gifts' take on "Sleepy City" (also from Metamorphosis) is sweeter, but no less truthful.  I love how Cartwright sees through the formalist cliches and to the heart of the songs.  That's one of the great strengths in his successful songs: the intuition that pop craft can amplify the human condition, not deflect it, or simply dress it up and reduce it to genre.

I like each of the Reigning Sound albums, and Cartwright's solo album Live At Circle A, where his voice and acoustic guitar sound ageless and folky, but never, to my ear, dated or slavish.  His songs for the Parting Gifts are equally strong, and I hope there will be more.  No one around right now can navigate the changes of the romantic heart and the changes of a two minute pop song quite as well and as urgently.  I'm a fan.


Distressingly grainy iPhone photos from the Parting Gifts' show at The Empty Bottle, in Chicago, March 4, 2011.
Posted by Joe Bonomo at 5:00 PM

Email ThisBlogThis!Share to TwitterShare to FacebookShare to Pinterest
Labels: Greg Cartwright, rock and roll, The Empty Bottle, The Parting Gifts