Me and The Bird 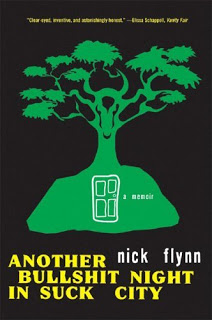 In Another Bullshit Night In Suck City, Nick Flynn writes about the bunker mentality and family closeness he cherished while watching the Boston Red Sox with his mother and brother during the 1975 season. "Part of watching the Red Sox together was to hunker down, circle the wagons, show a unified front," Flynn writes about a discordant season in his dysfunctional family's life. "But the greater (if unspoken) part for my brother and me was to be close to our mother, to keep an eye on her." Flynn was fifteen,


an age when most kids are breaking from their parents, spending more time with their friends, developing a secret language only they can understand. But now my mother, brother and I are developing our own common language, talking about Fred Lynn and Bernie Carbo over dinner, over our newfound couscous and curries. We knew the strengths and weaknesses of each player, how they'd done against the A's last time around, who to watch out for, who was a hitter, who'd made an incredible catch....  My mother had made it clear that she wouldn't be around forever—If something happens to me..., she'd say. To look into her face for too long only brought up dread. To stare as one into the television on a hot Saturday afternoon, to glimpse the word outside still going on, unfolding with or without us, to feel part of something larger, something that made it to the newspapers every day, that people seemed excited about, something to get caught up in and carried along by—Tiant would be pitching next Saturday, maybe reason enough to stick around, if just to see how it turned out, if just to see him smoke the bastards.

Maybe reason enough to stick around. That phrase resonates throughout Flynn's memoir about his absent father and chaotic, splintering home life. Watching the Red Sox reminded Flynn that the world was still going on out there, despite his family's implosion, and the momentum of the season (ending in heartbreak, as all fans of the game know) gave him a sense of abstract if urgent hope, a daily stay against chaos.

The summer after Flynn followed the Red Sox I was with my family in Reboboth Beach, Delaware, where we'd rented a house for a week. My romanticized, lone-wolf self-image nascent, I was beginning to explore places on my own, relishing emotional solitude even when with my family on outings. This time I was on my own, at a five and dime store near the boardwalk. I was eyeing a basket of plastic gold rings, imagining one of them on my finger, lost in a kind of gaudy materialism that I couldn't yet name. I glanced around quickly, grabbed a ring, and stuffed into my shorts pocket. Casual, terrified, I skulked outside into the sunny afternoon, the roar of the Atlantic behind me as I scurried home. It was June 28, 1976.

I know the date in retrospect because of what happened that night. All afternoon I'd been in anguish about stealing the ring, awash in embarrassment and fear, and not a little shame, sweatily fingering the ring in my pocket in slow-motion panic. I knew that what I'd done was wrong. Worse, I knew that I had to confess, if only to face down my growing nausea. That night my dad made popcorn in the kitchen, my brothers and sister and I drank orange soda from cans around the table, all of us weary from sunburn, and at some point someone turned on the television. I couldn't enjoy any of it. I either found my parents upstairs in their bedroom or I asked them to come up; however it unfolded, I shakily produced the ring from my pocket and told them the story. I was afraid, and crying. The next day, my parents walked with me into the store where I returned the ring to the owner. What I remember now is knotted, understanding concern on my parents' faces—no upbraiding, no yelling. I remember very little of the store owner's face and reaction; perhaps I've blocked it out. 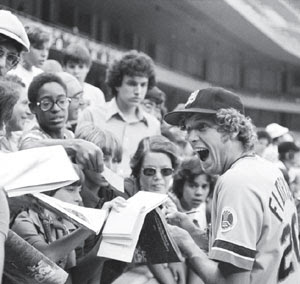 An ordinary, small trespass, the kind committed every day by kids. Trivial. As I was upstairs unburdening myself to my parents, downstairs Mark "The Bird" Fidrych was on TV in the process of electrifying the nation and guaranteeing himself pop culture immortality. I vividly remember my brothers cheering and yelping as the game played and as Fidrych talked to the ball, scooped out circles on the mound, jumped up and down, and prowled the mound area like a lunatic, his yellow hair spilling from under his cap, his eyes and toothy grin bulging, friendly and wacky. Millions of Americans were watching, Warner Wolf and Bob Uecker were amused, and I was upstairs confessing a petty sin with the door closed. What strikes me now is the permanent connection in my mind between my theft and admission, and The Bird's antics. How dissimilar the stages!  Fidrych on a national arena, me in my parents' bedroom. Fidrych ebullient, charming, out-of-this-world, glad-handing his catcher and the fans, me cringing in shame, a little mortified. One triumphant, one dejected. Two opposites, forever linked in my mind.

I'm thinking of this after Flynn, and I'm wary of trusting the memory as anything more than it is. Flynn's emotional connection to the '75 Red Sox was bred from hope against despair, community against disunity, finding a home in chaos. My connection to The Bird is a small disconnect, hardly profound, and yet it's burned in there for good, a permanent duet between the private and the personal, the domestic and the national, the tiny and the large. A humid Monday night in mid-70s America: a pop culture spectacle being broadcast to millions while a little kid's upstairs, hearing the muffled shouts of his brothers, wishing he could be there too but knowing that his sour stomach would preclude any fun, confessing something trite.

"We only store in memory images of value," says Patricia Hampl. What does this confluence mean? My memory has a time-date stamp at the bottom. What goes on behind us means nothing, and yet somehow everything. Culture is never simply the background against which stuff happens. Bird, meet Boy. You'll go on linked arm-and-arm.

Photo of Mark Fidrych via Sportsbook Bonus.
Posted by Joe Bonomo at 10:59 AM

the greatest video of fidrych!!!

such excitement and sheer joy of just playing baseball!

i cant believe there are not more videos!!!

MLB is a disgrace with almost NOTHING in their vaults

It was Werner Wolf and Bob Uecker, not Al Michaels

You're right, patolds. Thanks. I'll correct that.