I'm pretty fascinated by the new Windows7 Cloud software.  You've seen the commercial, the one where the harried mom laments her family's inability to take a decent family photo, when voila, she's inspired to use software that allows her to pick and choose among her family members' "best shots" from poses on the living room couch:


The implications of this in terms of memory and autobiography are interesting.  Of course, we've been retouching and enhancing photographs virtually as long as photographs have been around.  Harry Farid at Dartmouth has a great site documenting this across history, citing as the earliest example an iconic photograph of President Lincoln created from the body of John Calhoun; General Ulysses Grant's photograph in front of troops in Virginia was actually composed of three separate images, and more recently Sarah Palin's head as been fixed atop a bikini-clad girl firing a machine gun.  Milan Kundera's The Book Of Laughter And Forgetting opens with a description of a seminal photograph in Bohemia's history: Communist leader Klement Gottwald is standing on a balcony on a cold day in Prague before thousands of citizens when his comrade Clementis generously places his own fur hat atop Gottwald's head.  A photo is snapped. Four years later, after Clementis is charged with treason and executed, the photograph that had circulated widely in books and posters and in the imaginations and memories of thousands is altered.  Kundera: 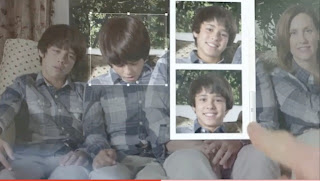 What interests me about the Windows7 software is the insidious way it encourages such deceit in the home, where image and narrative are as important as they are in politics.  Families, after all, contain their own cultural and political histories and now, with Bill Gates' blessings,  we can amend them at will. The group photo "as is"—slumped siblings, vacant stares, unappealing countenances, telegraphed resentments, forced smiles, and bad hair, all of which are ingredients in the family—is a wonderful if often painful record of a flawed, thus genuine, human moment.  Played for laughs later, maybe, the cause of mild embarrassment or pain unspoken, the un-retouched family photo captures emotional drama in the ways that only candid images can.  The same way the awful carpeting or wallpaper or chintzy wall hanging both characterizes and dramatizes a certain period in a family's history, so do facial expressions and body language tell a real story caught in real time.


"But photographs are problematic evidence, cropped experience," writes David Lazar in The Body of Brooklyn.  Sure, and maybe Windows7 simply acknowledges this, with the rocket-boost of contemporary technology and consumerism behind it.  All photos simultaneously tell the truth and deceive, but Windows7 sells this as a product incentive, urging consumers to reconstruct the past in a way more fitting, more appealing—and certainly less real, at least in the increasingly-quaint notion of that word.  Diane Arbus says that a photograph "is a secret about a secret.  The more it tells you the less you know."  Windows7 drains a photograph of this kind of mystery, replaces secrets with manipulated half-truths, with spin, with truth arrived at via digital dissembling: not what you are, but what you want to be. 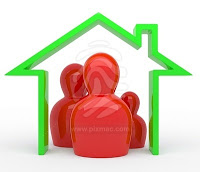 I must avoid sounding like an alarmist here; one can extrapolate too far from a mom's reluctance to send out a disappointing Christmas photo.  But the urge to ignore an all-too-vivid past is there in the software, and in the humorous commercial, where dad's another irresponsible man-child and mom the adult savior. The family is attractive, the situation amusing, the tool innocent enough—then why do I get a faint chill?  Years from now, when Windows7 is supplanted by any number of upgrades, after the family is grown and dispersed, the photo will serve as a document.  What's forgotten will be the manipulation, the doctored heads and pasted-in faces, each telling a slightly different story at slightly different times, a po-mo narrative cobbled together and presented as unifying.  Siblings as collage.  Adolescence as Cubism.  The Twenty-first Century Family.

When I was a kid at Saint Andrew the Apostle I dreaded school photo day, as did nearly everyone.  On the morning of one photo day—I was 10, maybe 11—my kind-of-friend Rob T. invited me to go along on his newspaper route.  Rob was a cool and daring guy, and I genuinely liked him and the prospect of the two of us hanging out was pretty great.  It was a warm autumn day, and by the time we got back, minutes before the bell rang, I was a sweaty mess, panicked that on Photo Day my cursed curly hair would only look wilder, greasier, and stringier.  I'd sacrificed vanity for friendship, and vanity won.  Of course, the photo confirmed my worst fears.  I recall this when I l see it, and how that simple morning was a suburban domino falling onto the next suburban domino.  I might have jumped at the chance to utilize Windows7 software at the time—cutting out an awful me and pasting in a less-awful one—but what I have is the truth of that unexceptional moment: a kid smiling through self-absorption, trying to survive something trivial, now having moved on.