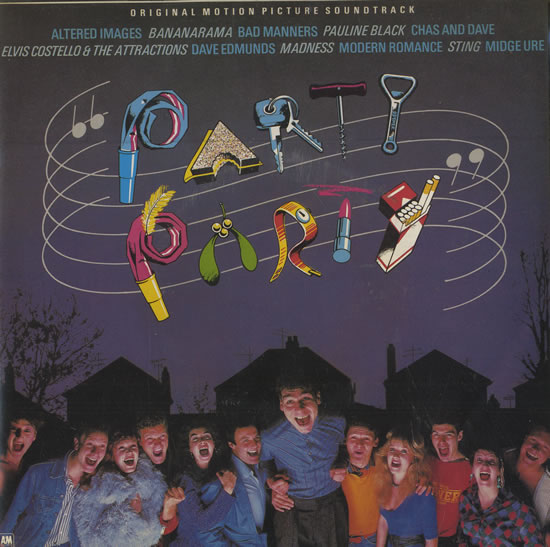 I've never understood why Elvis Costello—an artist intent on re-releasing his entire back catalogue—has turned his back on "Party Party," a tune that he and the Attractions donated to the soundtrack to Party Party, a 1983 British film. "Party Party" has been omitted from Costello's cannon on his official website, hasn't been reissued on any of Costello's numerous CDs, hasn't appeared in digital form at all apart from an obscure singles-compilation on Edsel Records, and has never been played live. The song was released as a limited promotional single by A&M, but that quickly disappeared. Costello himself rarely discusses the song.

I bought Party Party as an import album when it came out—Costello, Dave Edmunds, Madness, Bananarama, and my raging crush on all-things-UK drew me in. I've always thought that "Party Party" is a pretty great song. The lyrics are funny, sarcastic, witheringly accurate and unromantic in their analysis of boy-girl politics and hangover miseries, and the gauche, faux-Latin tune is catchy, appealing, and fun (I especially like the horn section's eye-rolls at some of Costello's jokes). It's a smart song about the mindless complications during and after our best/worst drinking antics.

We're gonna drink enough tonight to drown the average army
By New Year's Day the next door neighbour will be goin' barmy
The milkman arrives at midday with his usual wisecrack
Who knows a girl with Wednesday legs so when's they gonna snap?

Bridge:
So shift yourself and shake your bod
You got bullet proof insurance from fire, flood and Act of God
You got to learn from your mistakes
When you got a face like last week's Cornflakes

Wiki helpfully points out to this ignorant American that "Advocaat is a Dutch drink, sometimes described as the 'Dutch Eggnog'," and that "Tizer is a red soft drink from the United Kingdom," but I don't understand the reference in the last line of the opening verse (anyone?). Beyond that, the narrative is clever and witty, and not cloyingly or obscurely so, the downfall of too many of Costello's songs. What I love most about "Party Party" is the classic Costelloian persona: the nerdy guy, shy with women, but intense and intent on self-destructive romantic tragedy. There's little meanness here, which is nice, just over-drinking, self-disgust, self-aggrandizement, unrequited lusts, bitter disappointments, and suicidal tendencies. All in the context of a party party. I like the "flowerbeds of fear and fertilizer," the face "like last week's Cornflakes," the pretentious but self-deflating "art tour" of the third verse, the Alka Seltzer "roaring like a lion," the last line's mocking denouement of melodrama and ineptitude. Sounds a lot like high school to me.

I'm not sure what accounts for Costello consigning "Party Party" to the dustbin of history. Maybe he's embarrassed by the lightness of the song (though even his "light" songs are spiked with bitterness), or maybe he's embarrassed by the made-to-order nature of the song's composition and history. But he's written far lighter songs than this, not to mention other songs for films, including entire scores. Turning his back on this little gem, I just don't get.

So here's my defense of, and support for, Elvis Costello and the Attractions' "Party Party."  May it one day be reissued. Via an appropriately scratchy source:

Email ThisBlogThis!Share to TwitterShare to FacebookShare to Pinterest
Labels: elvis costello, elvis costello and the attractions

I completely agree. Terrific song, better than most of "Punch The Clock" but with the same great horn sounds.

There seems to be some disagreement over the term "Wednesday legs", either "very thin legs" or "very attractive legs". I was surprised to find a reference on Urban Dictionary: http://www.urbandictionary.com/define.php?term=wednesday%20legs

You can make some sense of the line either way.

Thanks for the diverting commentary.

Thanks, Pat. A number of people have explained Wednesday Legs to me, and a guy from the UK wrote me that "when's they" is likely an aural pun on "Wednesday"—which sure sounds like an EC move to me.

And yeah, Party Party's at least as good as, say, The World And His Wife...

Interesting - I forgive EC a lot, obviously, but I kinda share his distaste for this song, which isn't to say anything against the performance it's given on the single. I think it's mostly that the couplet, couplet, couplet structure gets boring, and too many of the lines are -just- about the rhymes. (Because, see these are things -I'm- never guilty of as a songwriter.) I never liked "The World and His Wife," a song that I think -he- thinks is a lot better, for just about the same reasons. (My favorite EC b-sides/throwaways post-Taking Liberties, by the way, are probably "Baby's Got a Brand New Hairdo" and "Heathen Town.")