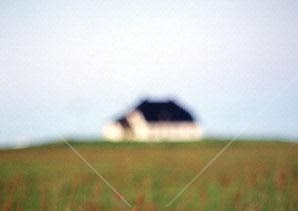 When I was young, maybe 11 or 12, I experienced something novel, soon afterward commonplace, something that everyone feels at one time or another, to one degree or another, but perhaps something that sticks with writers the most.  I was in my parents' car on a long trip from Maryland (to visit my grandparents in western Ohio, I think) and it was dusk, and possessed by that weird, urgent feeling of restlessness I looked out the window at a line of unremarkable houses running parallel with the highway, one of those glimpses of small towns  in the Midwest you see going 70 miles and hour.  I was tired and probably bored, and struck with a cold splash in the chest: each of those homes is like mine.  Like mine was an abstraction too enormous to possibly comprehend: each house has a family, and stories, and photo albums, and basements or attics full of mysteries and heartaches and the ineffable, and people with personalities, and objects and things prized by families and people, and countless memories and stories and laughter and crying all building up and being forgotten and remembered and rewritten, each house has those weird smells that you don't notice in your own house but are squeamishly aware of in your friend's house, each house has a yard where the trivial and the dramatic play out, and fences citing borders....

In a moment, I was overwhelmed with this heady stuff, little of which I named as above, and all of which confounded my brain.  This is an utterly ordinary epiphany that feels (and is) remarkable at the moment but is soon slotted alongside other discoveries originating in the subjective.  What I remember feeling explicitly, though, is something that I still think about, and that still feels profound: I remember thinking, This is literally impossible.  No one's home can be like mine, let alone hundreds, thousands, hundreds of thousands, millions.  Words I didn't use at age 12 but concepts I fully intuited: it was inconceivable that my home—which was overwhelming in the subject and content it presented to me on a minute-by-minute basis—could possibly be replicated, even in a faint way, by another home.  This was beyond simple solipsism and the painful limitations of an adolescent perspective.  This discovery felt so true and urgent as to be quantifiable, an absolute, like 1+1=2 and the sun will rise tomorrow.  My small brain could not possibly accept as irrefutable fact that another home like mine could exist. 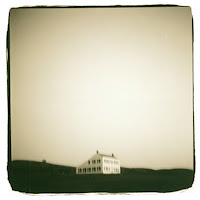 Strange stuff, considering that I spent lots of hours in friends' homes, cousins' homes, etc..  But the force of this belief on my part, whizzing past an anonymous row of houses somewhere in Pennsylvania or Ohio, was so strong as to be undeniable.  And so I was faced with a problem (and here's where I think my nascent writer's sensibility was being forged): what to do when a fact you're convinced by is obviously incorrect, and yet feels to you as true and as accurate as the ground beneath your feet?  Go insane?  I feel for young minds that can't comprehend to the point of unhealthy distraction.  Wait it out?  That's the strange engine of adolescence, waiting impatient and hostile for your personal truths to be tested and proven wrong, or broken.  (Can you tell I've been re-reading Orwell and Frank Conroy?)  Yes, we wait it out: the maddening stretch of adolescence when surrealism is your realism.  The walk to school feels infinite, especially if the walker is heartbroken; that man can't be 20 feet tall, and yet, of course, somehow he is; it's impossible that the emotional infinity of my home is present in every house down the street the block the county the state the country the world...before squiggly lines straighten out, and life looks less like an M.C. Escher print every day.

The energy in that contradictory moment—my home cannot possibly be replicated, and yet is replicated everywhere, all of the time—is the conundrum that moves and haunts every autobiographical writer.  The challenge, and where something of interest and value can be shaped out of cliche, is to make sense of that conundrum other than to simply acknowledge, "It exists."  If it exists, and it does, then what are the implications?  My navigation between the hopelessly subjective and the more interesting objective, between the "I" and the "You," might've begun during those dusk moments in the car when I was jolted awake, recognizing, without naming it, that the importance of my own life is simply a house of cards on a block with other houses of cards, in a town full of boys and girls who can't possibly believe that I exist.  It's too threatening to them, too impossible to ever believe.


Detail of "Grass in foreground, blurred house in distance" via Stockphoto; house via Angela Wyant Photography
Posted by Joe Bonomo at 12:15 PM

Good one, Joe. It brings back similar memories of mine--anyone can relate. And the sad thing is that an adult could not help a kid with something like that, even if the kid could explain it.

Thanks, Richard. You're right--impossible to contextualize that for a kid, or to add helpful perspective. That's what he/she's got to find.