I just watched Albert Lamorisse's 1956 short The Red Balloon for the first time in over 30 years.  Like so many others, I first saw the film in grade school, in my case St. Andrew The Apostle, in Wheaton, Maryland, sitting in the all-purpose room (or was it the library?).  Maybe we we kids were annoyed at having to be inside, or maybe it was a cold day and we were happy to be indoors.  I remember stiff metal chairs, the whirring of the 16mm film strip, the dark room.  Most of all, I remember the red balloon.

I was entranced for a lot of reasons—the solitude of the boy, the vividness of his imagination, the tormenting bullies.  Much of the movie had blurred to an indistinct gray over the decades, but certain images remained indelible; I was curious what I might experience watching the film again as an adult.  Remarkably, The Red Balloon hasn't aged at all, despite its post-Second War setting, much of which doesn't exist anymore or has been radically restructured in the last half century.  The half-hour short remains as haunting and heartbreaking as it was when I watched as a kid.  What I noticed this time around was Lamorisse's ingenious filmmaking, the wide-shots and cramped alleys, the skittery, hand-held joy and the boy's smacking footsteps echoing down the streets.  I should qualify: I did respond to the film's form and style as a kid, I just, of course, couldn't articulate it.  Great art communicates before it is understood, said T. S. Eliot, and I wonder if he had children in mind as well as adults. 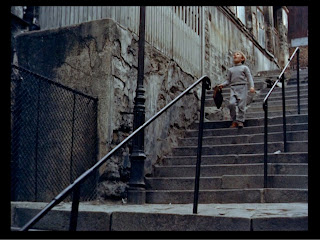 Two and a half minutes in, Lamorisse creates a visual tension among the steep Parisian steps, the boy's descent, and his curious upward gaze.  In a dizzying, elated way I felt that tension watching as a child. The boy's staring up at the balloon, of course.  I loved that he climbed up the pole on his own to fetch it: no adults needed.  (He looks around before he scampers up; is he searching for helpful adults, or is he making sure no one's around.) After watching the film for the first time, back in the banal school hallways and the complicated, unhappy politics of the classrooms and playground, what I walked away with was the boy's spirited sense of independence.  The grown-ups in The Red Balloon are stern, aged, mean taskmasters: the boy's grandmother who thrusts the balloon out of the apartment window; the school teacher who locks the boy in his office after the balloon's appearance causes a good-natured ruckus among the students.  (There is one nice adult in the film, the street sweeper on the corner who agrees to hold the balloon for the boy while he's in school, and whose eyes shimmer in childlike recognition of the balloon's enchantment.)  The boy really needs nothing else but his balloon, which may be wholly imagined by him, or which may actually exist. He was friendless, maybe, but content.


There are so many great moments: the breathtaking tracking shot early in the film as the boy, clutching the balloon, runs across the bridge, the steam train roaring beneath him: 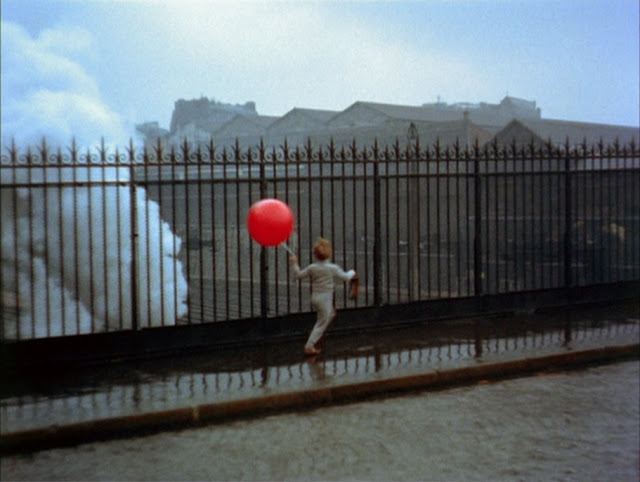 The balloon following the boy through the streets, playfully but obediently, the unspoken friendship growing between them: 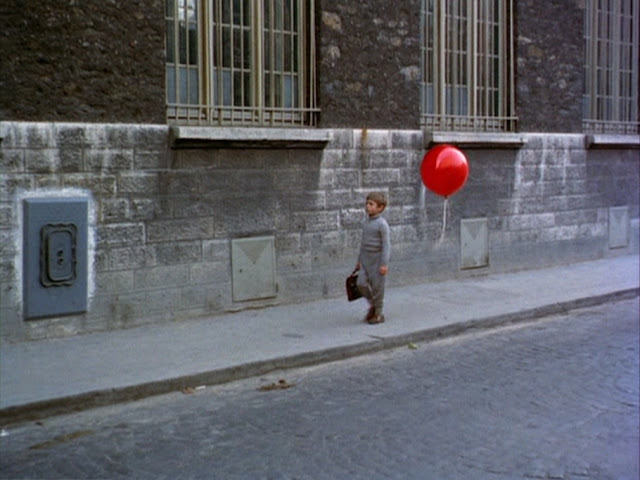 The boy vaguely recognizing a kind of kindred spirit in a painting at an open-air street market.  (At the same time nearby the balloon, off on its own, gazing curiously, maybe longingly, at its own reflection in a dusty mirror.)  The boy's staring at a feminine doppelganger, another kid transported by, and requiring, little more than her imagination: 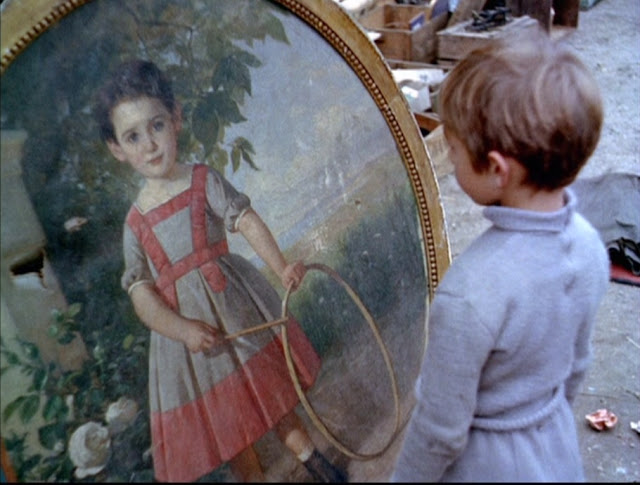 A girl's blue balloon crushing on the boy's balloon, a hint of complexity that even I got as a kid: 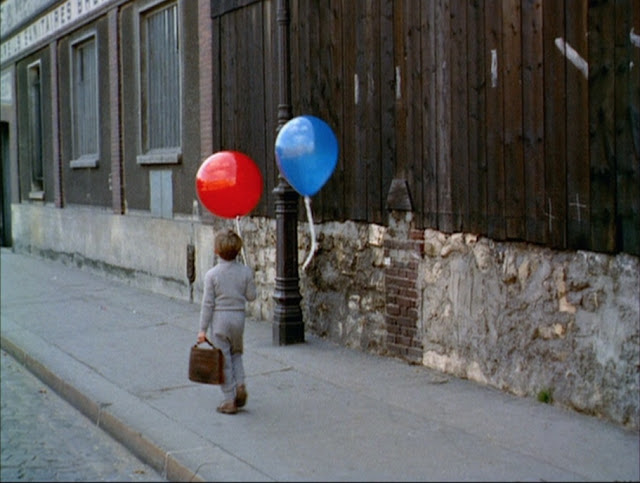 A fantastic shot of a narrow alley among many through which the boy is chased by the town bullies, the claustrophobic mise-en-scéne perfectly translating his fear and anxiety, the proximity of the boys and their terrorizing, the helplessness, the close calls: 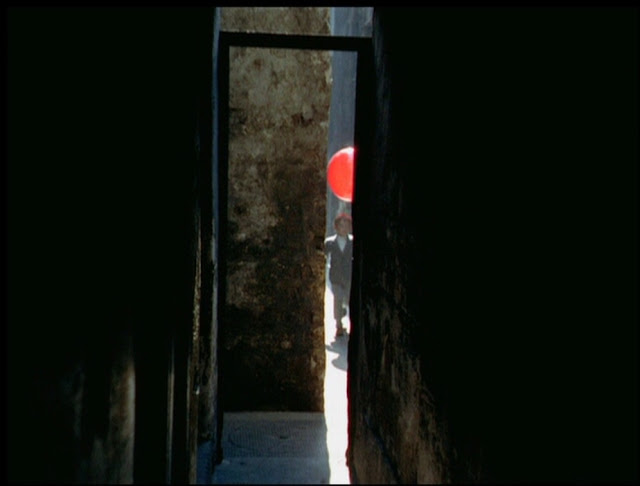 Of course, the balloon's destruction at the hands (and feet) of the adolescent mob.   I remember the throat-tightening sadness I felt as a kid watching the balloon's withering descent: 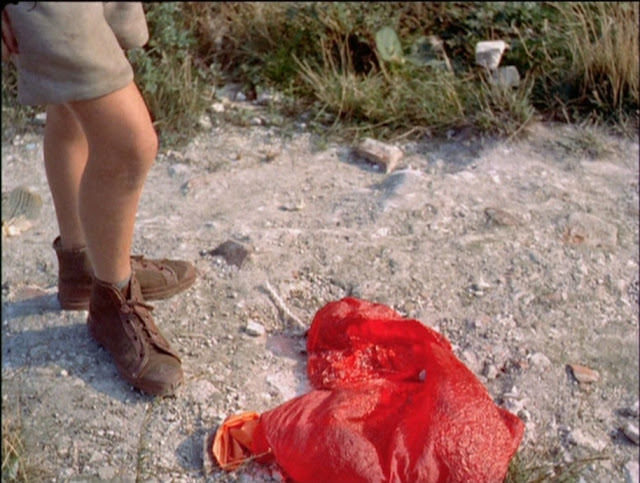 And the fantastic, surreal act of the city's hundreds of colorful balloons, hearing the boy's distress and converging from all corners, rescuing him en masse, lifting him away from his heartaches and over and beyond a city made up of bullies and uncomprehending grown-ups. 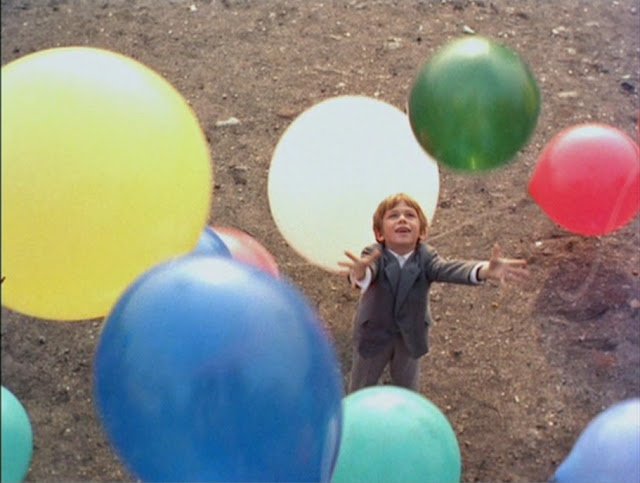 It's wonderful stuff.  Watching as a kid, I rooted for the boy, identifying strongly with his quiet nature and his overactive imagination, his small body and his pleasures and minimal speech.  Thirty years later I still can't articulate what I felt watching the boy being lifted over Paris at the movie's close: envy; fear; sympathy; empathy; satisfaction; wonder.  All trite words, especially when stacked up against my then-dimly growing comprehension of a world where meanness, pettiness, and intolerance can easily overpower the substantial, fragile world fostered by the imagination.  What I loved—what I love—was the natural ease with which the boy and his balloon take to each other, an inevitable relationship even as the boy's surprised to find the balloon in the first place.  I've recently read commentary theorizing a Christian theme in the balloon's torment-by-mob up and down cobbled streets, and to its eventual resurrection elevating the boy into the sky.  Even though I sat, rapt, inside of Catholic school while watching the first time, what I experienced was purely, and excitingly, secular: the value of the imaginative life, its seductions and dangers and necessary solitude and its eventual vindication.  Again: language I didn't have, but sentiment I possessed.  Immodestly, I thought that the boy looked a little like me, though I wouldn't have admitted this to anyone, and I needed little internal coaxing to fly away with him at the end. 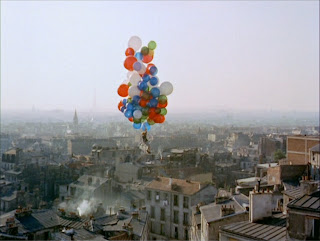 Four years ago, the boy—Pascal Lamorisee, the director's son—spoke with NPR on the occasion of the film's re-release.  He said:

Well, I would imagine, you know, it's a story that has to do with the heart. You know, it's a love story, it's between the things you cherish the most. It's this poor little boy, we'll call him Pascal; he seems to have a grandmother, no sisters, no parents, and his only hope in life is his—his only real, real friend, you know, close friend is the red balloon. I would say all kids have, you know, either a pet or a dream that is close to their life, that makes sense.


Makes sense.  I was happy to hear him speak of the film's power so many years later.  In the world cast by The Red Balloon, a pet, a dream, a balloon, they're all the same.

While I was thinking about The Red Balloon, the Kills' "Black Balloon" from their Midnight Boom album popped up providentially on iTunes shuffle. Alison Mosshart and Jamie Hince's lyrics bear no relation to the film, but the melody evokes the boy's melancholy, the "farewells" in both movie and song rising and falling evocatively.  I include it as a kind of echo.