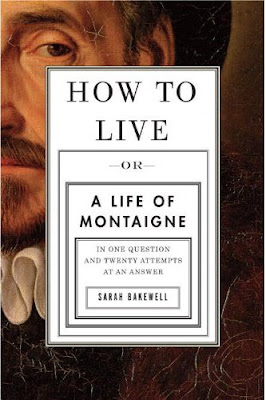 I've just finished reading Sara Bakewell's absorbing How To Live: Or A Life Of Montaigne In One Question And Twenty Attempts At An Answer.  Montaigne was a fascinating man in his commonness.  His life wasn't common — the majority of us are not born into nobility, live on a prosperous wine-growing estate, or became mayor of a town, let alone enjoy sufficient leisure time to devote to writing — but as anyone who's a fan of Montaigne's Essays knows, the ordinariness of living, not one's special trappings, is his great and endless subject.  Montaigne's "I," though a unique one, is universal; at its best, his hundreds of pages of autobiographical essaying over decades reduce (or elevate) that "I" to a silhouette of the human condition, where Montaigne's specific biographical details and 16th century historical and regional contexts evaporate into ether that drifts over time.  What's left is the human across ages.

This is not new, of course, but Bakewell's biography does a great job of freshly presenting Montaigne's achievements both during his life and after his death, discussing not only the content of his essays but the heated and humane reactions to them by successive generations, and how those generations found warmth in or recoiled from Montaigne's musings.  How To Live explores the human's tendency to recognize himself/herself in what's gazed upon, whether it's a mirror, a book, a political process, or an act of war.  Bakewell describes the manner which the Romantics, the Protestants, the Victorians, the English, the Twentieth Century postmodernists, among many others, all found their own versions of Montaigne — and how they needed to — and how those versions were created and affected by the politics of translation, of abridgement, of religion, and of pride and self-indulgence.  And as Bakewell points out again and again, this would have delighted Montaigne, "the accidental philosopher," wryly aware as he was of the flux of life, the self-interested need for the corroboration of self, and of the limitless lives of language in the minds and hearts of readers.

I came to Montaigne late, and hesitantly.  He'd slipped through the cracks in my undergraduate education (so did Yeats!), and he was of little interest to me beyond a dutiful head-nod to the The Cannon until I moved from writing poems to writing essays, about a dozen or so years ago.  Suddenly, he was everywhere: in my reading, in the libraries of my favorite essayists, in my shamed, late-to-the-party conscience.  So I moved through the Essays slowly, first with Phillip Lopate's help, then on my own, eyes glazing at the obscure historical references; I taught the essays for a semester, and slowly grew to appreciate them beyond a kind of essayist's obligation.  One day it struck me that appreciating and fully absorbing Montaigne was going to take the bulk of my lifetime.  Then he made sense.  "Anyone who turns his prime attention onto himself will hardly ever find himself in the same state twice."  It was going to take a while.  A man's life.


Modern readers who approach Montaigne asking what he can do for them are asking the same question he himself asked of Seneca, Sextus, and Lucretius—and the same question they asked of their predecessors.  This is what Virginia Woolf's chain of minds really means: not a scholarly tradition, but a series of self-interested individuals puzzling over their own lives, yet doing it cooperatively.  All share a quality that can simply be thought of as "humanity": the experience of being a thinking, feeling being who must get on with an ordinary human life—though Montaigne willingly extended the union of minds to embrace other species too.
That is why, for Montaigne, even the most ordinary existence tells us all we need to know:

I set forth a humble and inglourious life; that does not matter.  You can tie up all moral philosophy with a common and private life just as well as with a life of richer stuff.

Indeed, that is just what a common and private life is: a life of the richest stuff imaginable. 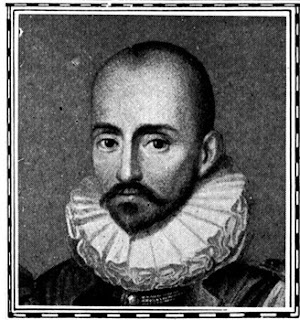 Bakewell's book is less a biography of Montaigne than it is a biography of mind, a chronicle of thinking.  Montaigne's often described as the first "modern person"; he was also the first blogger, in that he edited and rewrote obsessively, never bound by false closure, always open to doubt and uncertainties, to the fluid nature of life and of self-expression.  (Many have made this point about Montaigne; especially good is Andrew Sullivan's take.)  Bakewell also tackles the tendentious, somewhat ludicrous history of  book publishing, and the violence of Catholic/Protestant warring, the mania of the French Civil Wars, and the heated, intimate nature of mentors and mentees.  Above all, How To Live is a well-written account of how honest, measured, disciplined, skeptical engagement of the self is the great leveler.  Smart, impressively researched, calming, and humane, How To Live is an important book.
Posted by Joe Bonomo at 1:24 PM

Reading it right now, Joe and loving the Montaigne-esque qaulity of the book. Great review.