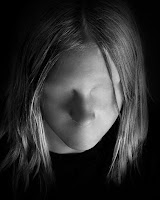 I'm wondering what accounts for our ability to picture people who we don’t know, or who may not even exist, when we hear or read about them.  I’m not referring to the mental image that comes after listening to or reading a highly-descriptive passage wherein someone’s acute physical characteristics are given (of course even then, one’s person’s “tall and rangy” might be another’s “wizened and weak,” so no two pictures are alike).  I mean: the image of that person that materialises immediately when one’s offered the merest of physical details  Last night as I listened This American Life I naturally and unselfconsciously pictured the man who was centrally described in the episode.  Afterward, I got online to see a photograph of him and was surprised (why?) that he didn't look at all how I'd imagined.

She walked in the room and shyly ran her hand along the window sill.

Who do you see?  Shyness, OK, that opens a certain window onto past or present people we might know who are timid, or who act timidly in certain places or situations.  But if I pare further, removing her shyness:

She walked in the room and ran her hand along the window sill.

We still see her, maybe now a different her.  “Her.”  Why?  I wonder what we draw on, if there are there essential human gestures, Ur-Gestures, silhouettes into which the human naturally fits.  I’m not a linguist, nor an expert in semiotics, perception, the imagination, or the brain; perhaps these fields can provide answers, of a sort.  Collective Unconscious, Signs, shared Cultural Histories....  I wonder what I draw on as I people a scene when offered little but anti-details.

She walked in the room.

Who is she now?  Who do you see?  Your sister, your mother, a friend, a girlfriend, an ex, a character from a story a movie a song.  Wholly imagined, or living next door?  As fully rendered a fictional character Jay Gatsby is, we all know that there are an infinite number of Gatsby's in the world's sympathetic imaginations.  (The exasperated sighs that come in response to how a novel's film version is cast.  Redford!?  DiCaprio!?)  In his very interesting piece "The Creature Lurches From The Lagoon," novelist Ricky Moody essays his experience of having witnessed The Ice Storm being made into a movie, and he says a lot of interesting things about film's failure (inability, actually) to translate the interior life.  About translation (the heart of film adaptation) he says,

No exact translation. At the moment of a translation or adaptation is a loss, a falling away from the spirit of the original, a depletion. A photograph is not a thing, even a word is not a thing, but a cinematic adaptation of a word (a sequence of moving pictures) is by its nature farther from the world of the actual and is thus artificial, like the prose paraphrasis of a poem, a falling away, a capitulation to the ingenuine.

And I guess that's what we're doing when we imagine a scene we're reading or listening to, a kind of translating of the semi-known into the known.  The implications for memoir seem very interesting to me: I try and describe very accurately someone I know, yet when you read or listen, you're seeing someone vaguely, or maybe wildly, different.  Substituting, without realizing or against your will, your own person.  Truth here is indeed a slippery notion if my actual is shaped by yours, if my literal (this really happened) is reassembled by your re-casting.  "That really happened to me, too."

Is it empathy that fills in the blanks?  Who haunts our seeing as we see.  How do we cast the room when the room’s barely there.
“Faceless” via Russ Okon
Posted by Joe Bonomo at 1:50 PM