In Which I Wrestle With Roger Angell And Lose 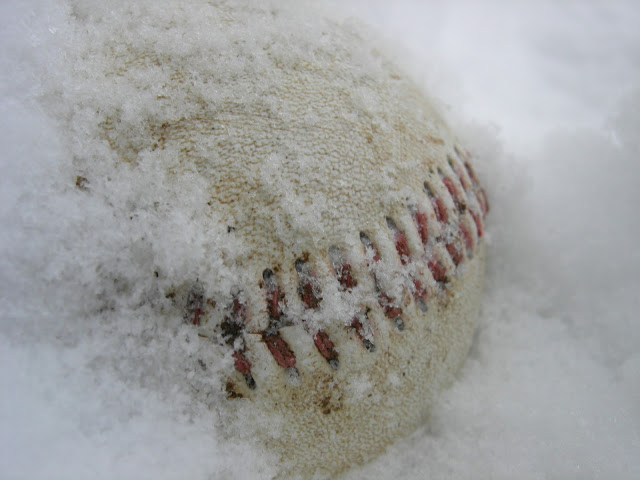 I turned to Ame outside of Jewel tonight and said, “Well OK, it’ll now be cold every day until April.” Thus I’ve been thinking more than usual about baseball.  I’ve been to a lot games, but my memories revolve less around the park than objects, images: my autographed Brooks Robinson photo; my card collections from 1976 and 1977; the head-tingling sight of a Topps three-pack at Wheaton Newsstand, an allowance splurge.  I kept the cards in a faux Army locker: Ken Singleton, Rupert Jones, Randy Jones, Fred Lynn, etc..  Earliest: the pennants hanging on the walls of my older brother’s room.  The Senators, and later the Orioles.  I think he had a Mets program from the late 60s?  The poster commemorating Hank Aaron’s record-breaking home run, the first still image of the game that I remember as viscerally exciting, the warm Southern black night, the arc of the ball, Aaron's wide disbelieving eyes.  A year later Carlton Fisk hit his infamous homer in Game Six of the World Series, and I watched it from the top of the stairs.  I think.  I remember raucous cheers from the rec room.  Did I dream that.  The endless replays.

I didn’t need to conjure the great Yankees postseason teams of the late 70s/early 80s.  My dad picked me up from school at Saint Andrew's so we could rush home and watch the one-off playoff game between the Yankees and Red Sox on October 2, 1978, a game that  Bucky Dent ended dramatically, and surprisingly.  I watched in surreal excitement and an intuitive sense of the lasting as Reggie hit his three home runs in Game Six of the ’77 Series.  Those Dodgers rivalries were a blast, I can recall my dad sitting on the chair, he feet tucked under his butt, rigid with excitement like a boy, then leaping up happily when Ron Cey overthrew Steve Garvey.  The coasts were barking at each other: Reggie throwing out his hip at the relay throw from second, the ball careening hilariously into the outfield.  Again, the roar from my brother and dad.  I sensed that it was wrong, and loved it because of that.  Bob Welch striking out Reggie with a high fastball, a kid against the legend.  A kid watching.  And I guess I can admit that I had a nonsexual crush on Craig Nettles.

In 1986, the Mets and the Red Sox met in a classic.  I ignored the Series, as I had since the early 80s.  (Brewers?  Cardinals?  Meh.)  The night Ray Knight came racing home as the ball leaked through Bill Buckner’s gimpy legs I was in the booth at my college radio station, guffawing and flirting, buzzed, with friends, spinning obscure records, fashioning a myth, as far away from baseball as I’d get.  Seven years earlier the Orioles had been in the Series against the Pirates.  The only memory I have is vaguely making fun of Willie Stargell’s weight and his cartoony, ballooning shots to center.  Puberty and girls were far too distracting.  I missed another good Series in '87.  The Twins and the Braves in '91, another gem.  One-run games.  Extra innings.  Game Seven.  Complete games from masterful pitchers.  I watched half-attentively, buried in grad school and girls and the bars.  Mild regrets to this day.

I made up for this in 1992 by watching (though it was tough to manage jumping up and down) as lead-footed Sid Bream slid under the tag and the Braves vaulted into the Series.  As the unaware Pirates began their historic, slow, painful slide into mediocrity, and worse, I became a rechristened fan of the game.  More atonement: in 1995 I made up for ignoring my hometown-by-default Orioles by celebrating Cal Ripken’s consecutive game streak.  I let my students out early from my night class so I could make it home in time to watch the victory lap.

Some of my fondest memories involve the radio, still my favorite way to catch a ballgame.  In 1978 I followed Pete Rose’s consecutive-game hitting streak.  In August of that year my family drove to Coldwater, Ohio to visit my grandparents — an annual trip, grandpa was an ardent Reds fan; his silhouette rising from his radio behind the warm yellow window when we’d arrive from Maryland, tired, gulping in exotic farmland odors, indelible.  Somewhere on the Pennsylvania or Ohio turnpikes by dad tuned in the Reds game and we listened to Rose’s plate appearances.  I imagined each pitch and swing and the one or two hits strobing cinematically against a pitch black foreign Ohio sky.

Thirty years later, again on the Pennsylvania Turnpike, this time heading east, and Ame said, “Let’s try and tune in a game.”  A button or two later and the White Sox, my team, come on, editorialized by a high-pitched ESPN announcer calling the three outs left for Mark Buehrle’s perfect game.  As I'd imagined Rose’s swings, I imagined DeWayne Wise’s scaling of the center field wall to preserve Buehrle's perfect game.  We were stuck in endless traffic, construction, single-lane purgatory.  We yelled after the last out and I pounded the roof of the car.  Who knew what the passing cars thought.

I'll end (who am I kidding, I'll continue) sentimentally.  On Father’s Day in 2006 I drove from Illinois to Maryland to surprise my dad.  He, my brother and his son, and I went to the Nationals game.  We turn to art, narrative and abstract, to give us life shaped: Ryan Zimmerman hit a game-winning home run in the bottom of the ninth.  Moments later amidst the din I spied Mariano Rivera, head-down, walking to the dugout.

I strongly resist the mythologizing and sepia-tinted, precious narratives that can arise when lovers of baseball discuss their game, especially with the nostalgic accumulation of decades of fandom behind them. I’ll end with Zimmerman’s walk-off.  Three generations of Bonomo’s cheering.  Clichés originating in beautiful truths.


"Baseball in Snow" via Rockpile Rant.
Posted by Joe Bonomo at 7:55 PM