When I lived in Athens, Ohio during graduate school I was tired a lot, the predictable consequence of balancing excess and discipline.  I'd often crash in the afternoons on a couch both hideous and insanely comfortable, and often while The Joy of Painting was on the local PBS station.

Bob Ross' voice — as millions know — is a sedative of the most pleasing, sonorous kind.  He'd ease me into my hungover or stressed-out nap not only with his susurrations but via the idealized little worlds, the realities, he'd create.  There's something comforting about Ross' landscapes, the slow emerging of tree lines, then trees, then foreground, then color, then a battered old abandoned barn that imported a (very small) gravitas into the scene.  Drifting in and out of sleep, I happily suspended my critical thinking and enjoyed the aesthetics of a kind of Prelapsarian prettiness where trees were happy because they were and because they provided shelter for little creatures who live beneath and inside of them.  It didn't matter to me that Ross was ignoring brutality, or, say, the grim emotional life of the farmer whose deserted barn might speak to disappointments and failures.  In fact, I'd chide myself for thinking such stuff.  Get over yourself. 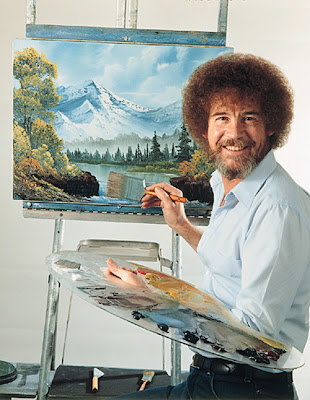 The Joy of Painting is a feast for the ears, especially vulnerable, weary ears.  Ross' gentle voice and manner, yes, but also the sounds that his brushes and edges made: the swishes and soft taps; the calm scraping; the damp pats; the washes.  God, it's wonderful, sensual stuff when you're crashed on the couch with a headache and want nothing less than a nicer and less ugly world to wake up to.  Ross' gentle exhortations were comforting, too — rubbing up mildly against my stringent, increasingly rarefied notions of aesthetics and art-making and collapsing them all.  I wouldn't buy a Bob Ross painting out of anything other than cool, distant irony, supercilious humor, or would I?  The answer to that question says a lot, and I should pursue it, but I'm sleeping now....

I took a Linguistics course in graduate school and remember wondering on the warm, moist places in Bob Ross' mouth where his tongue would land when he said, so gently and invitingly, "titanium white."  In that dreamy haze between sleep and wakefulness Ross' simple recitation of colors, of a philosophy of representational painting that involved no existential mania, no senseless violence, no "nature red in tooth and claw," no questioning of God's place in the fractured design of a cruel world — it was enough to take my knees out from under me, and it was a good thing I was lying down.  Ross' small landscapes would sometimes bring tears to my eyes, vulnerable and exhausted as I was laid out by a hangover and a burdensome, tiresome way of seeing things.  Trees make friends with other trees, man, that's nice.


In our Post-Ironic era there are people who are inordinately obsessed with your personal life, or who spend hours on Photoshop rendering images of you painting "Hail Satan" on your canvas or mockingly deifying you, but Bob Ross, you always restored a simple elegance to the world and its making.  It's too easy to defend against small, genuine pleasures with irony and distance, with Godless indifference.  I may have teased you in public, or inwardly scorned your simplistic renderings, but it was nearly always in conflict with the real pleasures I experienced while watching you chasten me, and remind me of the world's beauty unburdened with lousy, imported dread.  I loved my naps with you.
Posted by Joe Bonomo at 10:42 AM

Bob Ross may have been a Boddhisatva.

What a sweet essay and remembrance,and I mean that truly and literally. I spent many moons in Athens myself, after your stint, and am not sure he's carried anymore. But a while back I caught some painting classes on PBS and was equally soothed--and riveted.

check out my blog www.soothetube.com

i have loads of full length, free bob ross vids!!