The Beatles at Fantasy Park

On Memorial Weekend in 1975 a local radio station in Washington D.C.—I think it was DC101—broadcast a live concert, "The Beatles at Fantasy Park." The event was syndicated over 200 stations and, hipped to the event by my older brothers, I was primed. We recorded the entire broadcast over two Certron cassette tapes that we'd bought at Dart Drug. The concert was, of course, a fake, an homage to the era's propensity for pseudo-events and to the timeless desire for the Beatles to reunite. The show's creators played a "set list" of Beatles songs onto which they dubbed arena-sized concert noise: a roaring, elated crowd; ambient spectator chatter caught on-mike; "interviews" with local personalities and with the individual Beatles themselves; reporters offering remote, on-the-spot features inside of the venue. An exciting Concert Event, indeed.

The verisimilitude was astounding. More than three decades later I remember the top-of-the-head-coming-off excitement I experienced that my words can only now pretend to translate. It was the coolest thing I'd ever heard, magical, strange, even though I knew it was a faked event, a conflation of dreams and technology—most of this beyond my articulation at the time. I remember the realistic-sounding jostling of the reporters to get closer to Lennon or Harrison who were opining for a group of journalists backstage.  (Someone faked the accents, I guess.) I remember marveling at the hoots and cheers and whistles of the crowd, the level of which was expertly raised and lowered during the performance. I remember that the show's creators decided to open with "Baby, You're A Rich Man" which was a weird enough choice that my brothers and I debated it for days afterward. There was definitively something of the era in the whole event: our family had bought the "Red" and "Blue" albums at Korvettes a couple of years before, and my head tingled with imagined scenes of this concert, and at the very real thrill of the idea of the Beatles back together, manufactured and canned as the whole thing was.

A few years later, a rumor was floated that the Beatles were reuniting to play a series of benefit concerts for the Cambodian and Vietnamese boat people. That morning I hopefully clipped the article from the Washington Post and handled it up in my bedroom as if it was a sacred text. The rumor burned up the playground at Saint Andrew the Apostle for a few days and, like the fade of the imagined crowd after the last encore at Fantasy Park, soon disappeared for good. The 1980s and Lennon's murder were around the corner.

I have the Fantasy Park cassette tapes downstairs in the basement, somewhere. I'm hesitant to dig them out and play them. My tape deck has lurked in that basement as well for years now; I'm not sure I'd remember how to hook it up to my stereo. Also, I'm wary of the brittle tapes themselves coming apart in a cloud of dust if I did try to play them.

The tapes are a locus for a strange, dark memory, as well. Weeks after recording the event, I was down in the basement of the house listening obsessively. Something weird overtook me, and I watched as my fingers pressed the red RECORD button on the tape recorder, erasing several seconds of the program.  I stared at the recorder, dumbstruck. I was heartsick. My heart raced, I depressed the button again, and again, alone in the room, erasing more of the show.  It was bizarre, and kind of sick. I knew that I'd deeply regret doing it—and I still do, 35 years later—and yet I got off on a kind of power that I suddenly could lord over myself.  Don't, I said. Do it, I said. Don't! I did. I was nauseous, ashamed of the disappointment I'd created for my brothers who also liked listening to the tape, and was ashamed of myself, and yet I luxuriated, unhappily, in a quasi-masochistic drama with only myself to blame, myself to champion. The song was interrupted by the quiet of the basement and my own stupid breathing. I was learning, without realizing, the ways we can betray ourselves, often against our will, often with malice, and often with heartbreak. (President Nixon had resigned less than a year before my trivial transgression in the basement, the infamous 18 1/2-second gap in the Watergate audiotape soon to surface. Now, I associate those two erasures in my memory, impossibly, frivolously.) I'll never get those seconds back.

What's been erased has been imprinted in me in a different, equally unchangeable way. Andre Dubus: "A trifling incident in a whole lifetime, you may say. Not true." The blend of excitement, fear, regret, and power I felt in those moments was curious, and sad. 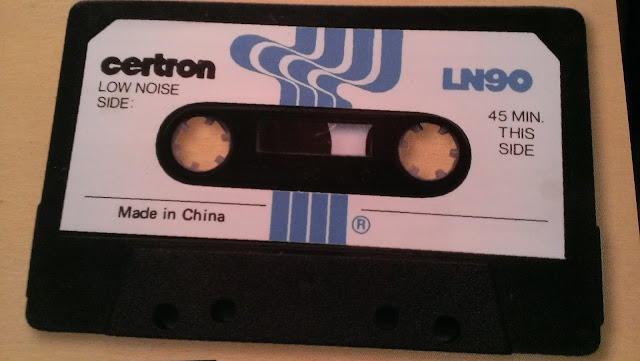 Image of Certron cassette via The Aural-Retentive Blog.
Posted by Joe Bonomo at 5:25 PM

#1 tape rule: always pop the tabs. I ruined a friend's bootleg of an early Pere Ubu show in a similar fugue.

I'd forgotten that trick!

Please check your email for a very important message. You may be able to get back those lost seconds.

Has anyone recovered a decent recording of the Beatles reunion on this? I have it on a cassette tape and the quality is not that great.