On (Not) Covering Literature

I've often wondered why writers don't cover literature the way musicians cover songs.  A band, a singer-songwriter gets up on stage and covers a song by a well-known artist or an obscure one, sometimes slavishly respectfully, sometimes making it their own.  Bands and musicians release entire albums devoted to covering other artists' material — there's a cottage industry of cover albums.  We think nothing of a singer turning another's song inside-out, paying respect to influence and history.  Some cover songs are jokes, some are overly-earnest.  (Forget tribute bands for now.) 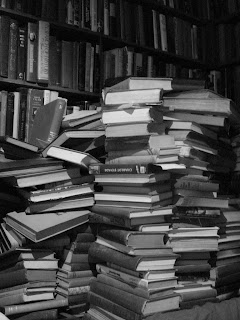 Occasionally a writer will read another writer's work — at his own reading, or at a benefit or tribute to another writer.  But that's not covering the work as a musician does.  We don't think of a band playing another's song as much as we think of the band interpreting  the song.  Where is this tradition in literature?  Where's the poet who covers Wallace Stevens?  The fiction writer who covers David Means?  The essayist who covers William Hazlitt?  What's missing in this equation — propriety?  Sensibility? Personality?  Perhaps there's a performance aspect lacking on the printed page that discourages interpretation.  I'm not sure.  I'm not thinking of a self-conscious homage, or an imitation written out of an exercise, writer's block, or respect.

I'll ask myself: can I go in front of a crowd (or a mic) and cover a David Lazar or Ander Monson essay?  Or, more interestingly, a James Baldwin or Joan Didion or Virginia Woolf essay?  I can read the piece — but where would my interpretation come in?  How would I filter the essay's style and content and place in history through my own?  I can mimic it, cop a certain voice or tic of style, but could I really deconstruct, rebuild, and newly (and wholly) inhabit the piece the way, say, Tommy Keene does with Lou Reed's "Kill Your Sons," the way the Beatles do with Little Richard, the way the Ramones do with Chris Montez?  Etc.  (Insert your own favorite cover versions here.)  Or for that matter, the way Roy Lichenstein and Andy Warhol co opted popular mass imagery and made it their own?  Perhaps if I collaged three or more essays by different writers a la Richard Hamilton?  An interesting mess, maybe.

There's a wall between artist and artist that seems unbridgeable — or at least more difficult to circumvent, or cross — in a work of literature, than in a song.  Is literature more personal — and, so, less easy to inhabit — than popular music?  That seems unlikely.  Of course, there are musicians whose work is so self-identified that it feels pointless to cover, but in the scheme of things those songs are probably the exceptions.

I'm asking too many questions now.  Help me out here.

"Books In a Stack (A Stack of Books)" courtesy of Flickr Creative Commons.
Posted by Joe Bonomo at 1:56 PM

I think you find a path toward an answer when you say, "Perhaps there's a performance aspect lacking on the printed page that discourages interpretation."

Literature is an odd art form to compare to music because we're so used to music REQUIRING a performance to be enjoyed. I can't just read the sheet music to Beethoven's 5th Symphony and be moved by it. I wouldn't know what's going on. But I don't need to hear or watch someone read "Play It As It Lays" for it to affect me deeply. (Shakespeare on the other hand is different, simply because that was written to be performed.) It seems as though cover versions as you describe are only limited to art forms centered around audio or visual experiences.

The first example that came to my head of a piece of literature that could potentially be classified as a cover version might be the recent trend of adding horror elements to classic, - think Pride and Prejudice and Zombies and Jane Slayre.

Perhaps a cover-version of literature could be accomplished by trying to tell the same story, explore the same theme, use the same images, but in your own words?

At any rate, a fascinating question Dr. B.

Maybe a performance aspect could be added by "performing" the act of writing another's novel entirely from memory (without cracking the original pages during the process). Surely, you would have to fill-in the gaps with your own variations on themes and story elements. The alterations would reflect your reactions to the original story, your own experiences and viewpoint, as well as the effects of your own writing process.

So this doesn't get at the performance aspect of your post, but as far as covering an essay, what about Eula Biss' Goodbye to All That in Notes from No Man's Land?

Unless the covering artist can bring distinct personality to reading another? Imagine Lou Reed on Elmore Leonard, or Dylan on Bukowski, or, keeping it to writers, Junot Diaz reading GG Marquez. You raise an interesting dilemma but it doesn't seem impossible. I refer to NON-musical potential examples above, but I'm also reminded of many songs adapted from literature - Paul Simon's Richard Cory, 'with apologies to' the original poet, or one of my favorites -John Mellencamp's Sometimes A Great Notion.
--Dan Aloi, Ithaca NY

Interesting, guys. Yeah. @Andy: very cool, blending genre as a way in. @Nuria: Biss' take is an interesting example, but as much an "inspired by Didion" as a cover? @Dan: You're right, not impossible. Leading with personality/presence as a way to inhabit/remake but still speak another's language.

Andrew's comment makes great sense to me--even Beethoven's performance of the sheet music is an interpretation, so that perhaps all performances of a written version are covers of the printed ditty. Performance of a literary work is not quite the equivalent, though The Old Dog's comment hints that it may have been when we had an oral literary culture. Would Natalie Merchant's Leave Your Sleep be a cover of all the literary texts she reinterprets musically?

Is a possible literary equivalent the use of a text as an overt reference point? I'm working on an piece possibly called "Why I Write," which perhaps covers the George Orwell, Joan Didion, and Terry Tempest Williams essays by that name (and what writer hasn't indulged in a cover of "Why I Write"). But it's not really a cover, is it?

And then there's the remix...

No, not really. An "inspired by" maybe, or an homage?

As I wrote on fb, a remix or sampling is still taking another's literal work and re-purposing it, as opposed to singing or writing it in our own voice. The more I think of it, the more the performance aspect seems crucial here. Dan A's got me thinking, though, too....

Joe, thanks for this. Last year, I published an essay that comes closes to the idea of cover that I think is possible for me. I was asked to write a piece for a collection to honor Louise DeSalvo on the occasion of her 70th birthday. I didn't want to write about her, I decided. I wanted to do something more intimate and oblique -- I wanted to show how she'd changed me, now she'd guided me through a dark period in my life, and how one essay of hers, in particular, had served as a touchstone. Her essay is called “A Portrait of the Puttana as a Middle-Aged Woolf Scholar.” Mine is called "A Portrait of the Mother as Writer and Researcher." I took the skeleton of DeSalvo's essay: her structure and certain key turns of phrase that held the thing up and I hung the flesh of my own essay onto it. I fought my scholarly impulse to footnote or explain what I was doing. Instead, I just did it and allowed it to be what it was -- to borrow what it did, to steal what it did, and transform in the ways that it managed to do. Perhaps what I produced is one iteration of an essay cover. The essay appears in a collection called _Personal Effects_, Edvige Giunta & Nancy Corona, eds. (Fordham UP, 2014). http://fordhampress.com/index.php/persona-effects-cloth.html

Thanks, Julija. Really interesting. I'll check that out.