Will You Be An Outlaw For My Love? 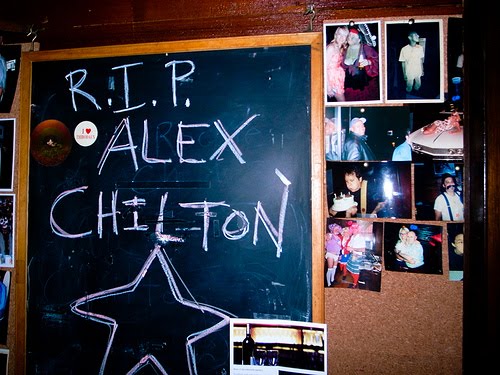 Richard Mazda recently produced a live tribute to Alex Chilton at the Secret Theatre in Long Island City, NY. He asked me to contribute an essay for the program:


Much like Jay Gatsby to Nick Carraway, Alex Chilton existed to me first as rumor, then as myth. I grew up in the Washington D.C. area listening to “The Letter” on oldies stations, loving the blue-eyed soul and grabby hooks before I knew who the man was singing it. Throughout the 1980s Chilton was a ghost on my periphery, a hipster’s name spied on worn records and uttered reverently at WMUC, the college radio station where I had a weekly show. I loved the Replacements’ paean to him on Pleased To Meet Me, understood Paul Westerberg’s worshipful crush, and I played it a lot; I loved the Cramps and Panther Burns records that Chilton produced, the primal vibe and the looks cast backward and forward. I knew that Big Star had brought jagged 1960s psych-folk into the difficult, differently-tuned Seventies; I’d marveled at the blissy guitars on Radio City, and knew the group’s classics, the mini pop opera of “O My Soul,” the jangle and accelerated heartbeat of “When My Baby’s Beside Me,” the descending chorus in “September Gurls” that sounds like nothing less than sorrow scored.

Chilton remained an indie gadfly whom I couldn’t ignore — but I was busy worshipping others. I’d spin tracks from Like Flies On Sherbet and High Priest and wonder what I was missing. I was listening to garage rock & roll, roots rock, later-generation power pop, but only later in the 1990s when I started paying closer attention did I discover that Chilton’s musical threads ran through most of the sounds that I cherish. Reinvestigating, I tried (in vain) to block out the heavy breathing that I’d heard from critics; as William Ruhlmann says about Big Star’s first album, “The problem with coming in late on an artwork lauded as ‘influential’ is that you've probably encountered the work it influenced first, so its truly innovative qualities are lost.” That’s true — my way back to Chilton was paved with Jonathan Richman, Ben Vaughn, and R.E.M. songs — but coming late afforded me my own time frame, less concerned as I was now with catching up than with slowing down and really listening to the music, post Chilton Myth.

What gave me a greater appreciation were the Big Star tunes that I was really hearing for the first time: the folky country pop of “Watch The Sunrise;” the defiantly desperate tone of “You Can’t Have Me;” the haunted, nearly unlistenable “Holocaust;” the love lyrics in “Nighttime” devolving into nihilism and fear, affected by the haunting echo of strings, slide guitar, and vocals; the dry, death-rattle sound in “Big Black Car.” “She’s A Mover” is one of the few introspective dance records that I’ve ever heard — and I wasn’t sure that such a hybrid was possible. Big Star’s semi-rousing take on the Kinks’ “‘Till The End Of The Day” lets go a bit more, but the band’s overall sound was guarded, however jangly — wary, however embracing. I followed this sound and attitude through Chilton’s solo albums, through others’ appreciations of him, and I better understood and respected the man and his music.

“Oh my soul, just hit me if I get on a roll,” You Am I sing in “Guys, Girls, Guitars” on their #4 Record. The guy they’re singing about has written 51 songs about a girl who split 50 weeks ago, but “it’s only a 2 AM tune” and “the seventh chord just keeps getting older.” The barely-disguised tribute to Alex Chilton nails the aloof, melodic sadness of much of Chilton’s catalog, pop and anti-pop communiqués from a misfit who’s armed with tunes, a guitar, and a wry, fractured, wholly unique way of seeing things. It took me a while to understand what I could of that guy, the musical outlaw. A part of Alex Chilton remains a bright, brooding enigma to me. And that’s about right.

The celebratory night featured some great music; Mazda and company did a superb job. I wish I could've been there.