When I write I'm struck by that weird tension between the act feeling crucial and the act feeling solipsistic. A fundamental dilemma for autobiographical essayists is how exactly to navigate between the necessity to write and the sinking realization that it may not really matter to anyone else. All writers, all artists, deal with this problem, of course, especially at this point in time, when via the blogosphere and social media literally millions of autobiographical missives are launched weekly, each voice clamoring for an audience of careful, sympathetic readers. We're past the trendy 25 Things About Me and Tweet-As-Memoir memes, thankfully, yet the amount of personal writing on the Internet is still staggering, and growing. 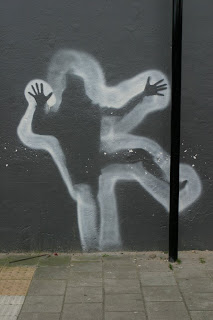 What are the implications for autobiographers? Is experience (however ordinary, however extraordinary) what matters, or is it the treatment of it? Content, or form. I'm less likely to move the moving parts in a way that distorts reality; I'm interested in verisimilitude also, but not at the expense of the actualness of actual events. A sincere voice is important in the essay, but again, who cares about your rite-of-passage, no matter how sincerely rendered? Writer and painter Max Jacob says, "What is called a sincere work is one that is endowed with enough strength to give reality to an illusion." But I'm more interested in the reality than the illusion. Is freshness of vision the answer? Proust: "The real voyage of discovery consists not in seeking new landscapes but in having new eyes."

Back to Wallace Stevens and his invaluable definition of metaphor, the magic act of re-presentation: "The absolute object slightly turned is a metaphor of that object." It seems to me that this slight turning of the absolute object is required in an essay, if the object doing the turning is also the object itself. What results (hopefully) is the human silhouette, my private details smoothed and outlined to become personal, a place where you might fit, where the people, places, things, and events of my remembered experiences might speak to yours. It's a tough act. Who cares?


Netherlands Silhouette 3 by Mechanical Turk
Posted by Joe Bonomo at 8:59 AM

I can really relate to this post, Joe. Have been feeling this way myself lately, and I've recently read a classic memoir I found tedious and am now reading a celebrated one about a family's dysfunction I find doesn't engage me. I think that the latter memoirist was motivated by more than ego, as I hope I am, so what gives? Why do some draw us in and how do we do it? There seems something larger about successful personal writing that transcends ego, but this is a slippery thing I don't yet understand.

Well, Vivian Gornick out it best: "What happened to the writer is not what matters; what matters is the larger sense that the writer is able to make of what happened." "Larger sense," yeah, but "to make" seems crucial. It goes not just to the larger concerns we explore autobiographically but to the artfulness with which we do it. Why do we feel tapped on the shoulder by great narrative (fiction) art? Why do we return? I guess it's a blend of language, imagination, story, narrative details, etc. A life or lives made to matter. We should expect no less of nonfiction.