The Space Age in My Basement

At the risk of sentimentality, I’m remembering a favorite toy when I was a kid. The AstroScope was a desk-top console with two knobs and faders; attached on a vertical neck was a bowl with a white drum stretched over it (and a faux radar antenna on top of that). Inside the bowl were mounted two jagged mirrors, and when operated they turned and reflected colored light against the inside of the drum. The result was a spacey, hauntingly quiet, multi-colored dance of circles and spirals that kept this kid mesmerized for hours. A couple of photos I found online, after (embarrassingly many) years of searching: 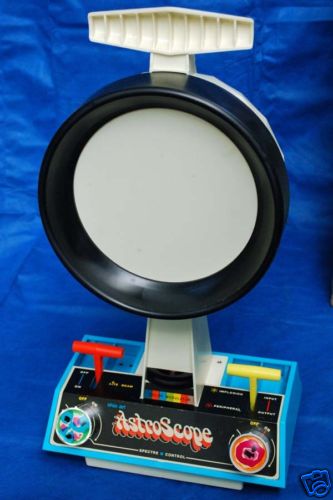 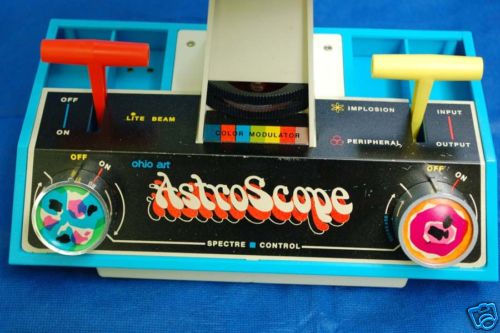 Check the “Spectre Control” panel and the “Input (Implosion)” and “Output (Peripheral)” knobs all wrapped up in a heady sci-fi treatment. I loved the AstroScope, and played with it in the air-conditioned cool of the basement. I forget now what narratives, if any, I’d use; I think I loved the abstractness of the toy, its kind of uselessness beyond the creation of infinite colors and shapes. A Toys "R" Us catalog advertisement promoted the AstroScope as an “Electronic Imagination Machine,” and that’s exactly what it was. So charmingly lo-fi now, the AstroScope allowed me to drift around in my head and play with aesthetics, with design for design's sake, without realizing it. 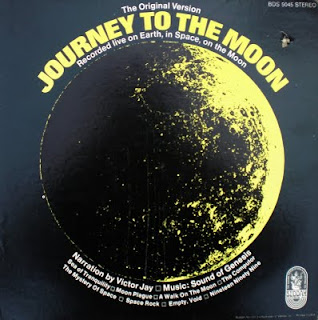 The Space Age drifted all around me. Major Matt Mason toys were strewn in various heroic poses on the basement floor, plastic rockets ascended and descended, the interstellar played out under the pool table. Playing on the Bonomo family stereo: astral 45’s by Deodato (“Also Spake Zarathustra [2001]”) and Vik Venus, the latter one of those novelty interview songs popular in the 1960s, this one a faux Q&A with astronauts that used Top 40 song snippets as answers. Also in high rotation in the Bonomo basement during these years, a record that’s immersed itself into my DNA, one my younger brother and I still obsess over. Journey To The Moon came out in the late-1960s on Buddah Records, an attempt to cash in on the Apollo lunar missions, twining actual astronaut/command control audio with acid-rock songs created by session players (“Sound of Genesis”). The album created an only-in-the-60s vibe, a trippy soundtrack of groovy, visionary instrumentals heralding the moon landings and all that they promised. The title track is awesome, actually, and is among my favorite rock & roll songs. Someone’s gotta reissue this record.
As I was rocking out to Journey To The Moon and losing hours with the AstroScope, I Dream of Jeannie reruns, and the myths of Cape Canaveral and Cocoa Beach, a vital era of the Space Age was coming to an end. The final moon landing occurred in 1972, the less-romanticized Skylab was soon launched, and the cumbersome Shuttle missions were in development. These events were special in my house, because for more than three decades my dad worked as an engineer at IBM, and much of his work was devoted to NASA projects. He was a member of the team that prepared IBM's proposal to design and develop NASA's RTCC (Real-Time Computer Complex) at Houston, Texas, which linked to world-wide NASA tracking stations and orbiting spacecraft, that monitored, commanded, and controlled all NASA manned spacecraft programs. My dad specified how computers processed tracking data, and determined and projected spacecraft orbits for command and control — all pretty cool, if baffling, stuff to me as a kid. I'd shyly admire the plaques and certificates from NASA on his walls, and the framed shot of the earth taken from the Apollo.
I wouldn’t understand the precise nature of my dad's work for years, but to me there was always a palpable and dreamy sense of the Space Age when I was a kid, when I crossed my eyes in front of the AstroScope, when limitlessness was the promise.
Posted by Joe Bonomo at 4:50 PM

What a wonderful post! Your familial attachment to NASA fascinates me. Also, I watched I Dream of Jeannie reruns obsessively when I was about six years old. The space program, in its various iterations (even as Major Nelson), is indeed the cultural backdrop for our generation. These very things are driving our Lofty Ambitions blog, and now you'll definitely see a Jeannie post there!

Thanks, Anna. L A looks great. I'll be visiting.

As I read, I couldn't help but think about the Challenger explosion, which radically impacted my generation. It is no wonder so many X-Gen kids have anxiety disorders. We grew up in the shadow of the Cold War and struggled in the cold grip of uncertainty: the shuttle disaster, the abduction and murder of Adam, razor blades in Halloween candy, the onset of the AIDS epidemic, and the war on drugs. I like your memories better than some of my own.

Wow this is a great resource.. I’m enjoying it.. good article

Man, what a great nostalgic moment you just gave me, Joe! I stumbled across the images of the AstroScope while searching for something else, and time literally froze for me. I had one as well, and it was an essential component of my childhood spaceship 'cockpit', which took me from one end of the universe to the other. The memory had long since faded, but seeing those pictures instantly transported me back to those days. Thanks!

Thomas, glad that it came back for you. It was a great toy. They're on eBay now and again...