I Remember That Future! 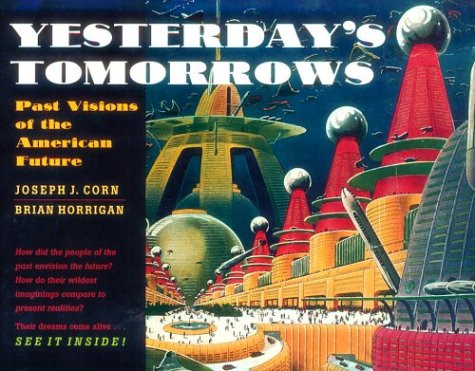 Yesterday’s Tomorrows: Past Visions of the American Future is a great book that celebrates the irresistible invention of posterity. Written by Joseph J. Corn and Brian Horrigan, edited by Katherine Chambers, the book began as a museum catalog for an early-1980s Smithsonian Institution traveling exhibit. Curating an absurd if powerful side of the imagination, the book documents great examples of humankind’s tendency to guarantee idealized futures, convinced by a century’s seductiveness that science and technology will indeed rescue us.

The authors write in the preface that their book “comprises some chapters in the history of the future . . . [I]n its broadest terms, this is a history of an idea, or a system of ideas—an ideology. The future, of course, does not exist except as an act of belief or imagination.” The imagination struggles earnestly to embody present-day values in a comically optimal tomorrow; in chapters titled “The Community of Tomorrow” and “The Transportation of Tomorrow” the authors crawl through popular magazines, trade magazines, advertisements, and World’s Fair catalogs, finding attempts by prognosticators to better today’s many petty nuisances — natural grass, crowded highways, dirty dishes, deteriorating housing materials, all manner of urban suffocation — by imagining their obsolescence in the future, obliterating today’s irritating truths with science’s magic wand.

What’s touching, and funny, about Yesterday’s Tomorrows is the naiveté. My favorite chapter is “The Home of Tomorrow.” The authors cite an article titled “Miracles You’ll See in the next Fifty Years” from a February 1950 Popular Mechanics wherein “Science Editor of The New York Times” Waldemar Kaempffert promises us all that in the future we will, among other breakthroughs, eat food from sawdust, cook on a solar range, eliminate “bouts with the razor” by treating whiskers with a chemical solution, eat dinner on plastic dishes that will vanish magically in hot water, and shop by picture phone (the last made possible in the 1980s with QVC and Home Shopping Network, et al). My favorite: “because everything in [the] home is waterproof . . . [we'll do our] daily cleaning with a hose,” the living room provided, naturally (sic), with a drain in the center of the water-proof carpeting for when Mom aims an industrial-strength blast of scalding water at the sofa.

“Xanadu: A Foam House of Tomorrow” (1983) was designed and marketed by Roy Mason. (To create grotesque “homes of tomorrow” we had to surrender to certain petrochemical seductions.) “Inflated forms are sprayed with a fast-setting polyurethane foam that creates a rigid shell, which can then be finished as a conventional house. The technique,” note the authors, “allows for infinite variations, though the ultimate result is bound to be fairly bizarre, eliciting comparisons with fungi, igloos, and cave dwellings.” The Xanadu mushroom homes suggest an acid trip through Alice of Wonderland. 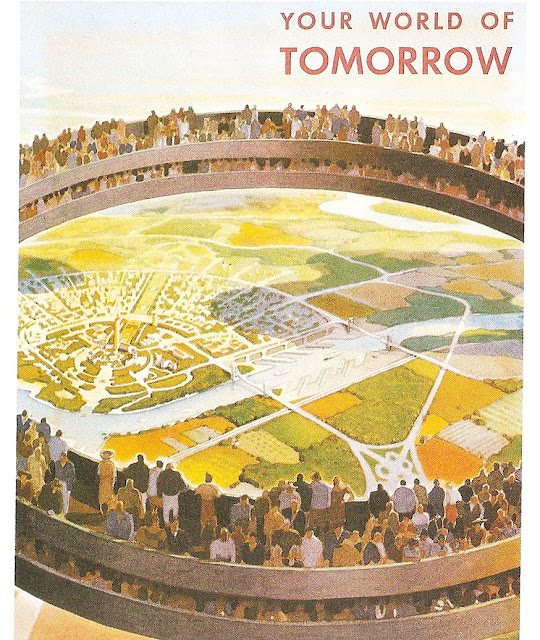 King Camp Gillette’s “Metropolis” (1894) and Buckminster Fuller’s “Old Man River’s City” (1971) were two plans for “utopian” maximum-capacity apartment dwellings: the chief physical characteristic is a utilitarian facelessness (later evolving ironically via urban renewal city projects of the 1960s and 1970s into characterless apartment towers, windows of which were sometimes painted over with silhouettes of happy dwellers, assuring the middle-class speeding by on their trains home. Or was that an urban myth? Did I dream that?). It’s the kind of visionary self-deception nailed by Bill Owens’ brilliant photographs of 1970s suburbia, where foliage is meant to be “raked off” a tree before it falls naturally, where Astroturf is the ultimate dream.

“New and Improved." We fabricate and deceive our future with glee and invention. New Coke promised New Next Minute. I grew up near Greenbelt, Maryland, a community described in Yesterday’s Tomorrows as one of three designed by the Federal government in the 1930s, a “vision of a self-contained, decentralized community of the future,” which failed, at least in the inflated New Deal loftiness with which it was heralded at the ‘39 New York World’s Fair. I remember Greenbelt in the 1970s and 1980s as a suburb crowded with Marylanders who couldn’t afford the city and with transplanted Washingtonians driven from the city by traffic, rent, crime fears, and a crumbling infrastructure.

A macabre pleasure of mine when I was a student at the University of Maryland was to take the drive on Rhode Island Ave. out of College Park into and through the northeast quadrant of Washington, D.C., on my way downtown. Passing through the community of Riverdale (now Riverdale Park), a few miles north of the D.C. line, I’d see a civically-erected sign pretty easy to miss: “Riverdale: Community of Tomorrow.”

Boarded-up apartment buildings, notorious drug-laced parks, two liquor stores-per-block, and garbage-strewn sidewalks and storefronts competed with the imagery on that sign: a WELCOME spelled out against a dreamy, soaring silhouette of towering skyscrapers and gleaming office buildings. I haven’t been back to the town in many years, and maybe its present has caught up with the idealized future that the past promised.
Posted by Joe Bonomo at 10:49 AM