The view from the rear window of a building on 14th St in Manhattan: 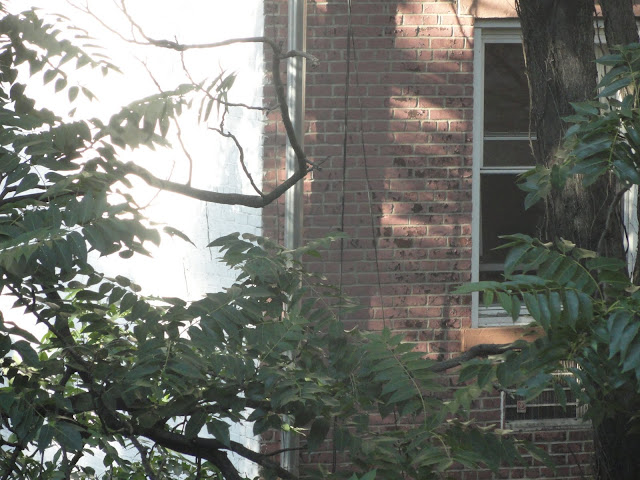 Something about the anonymity of this building struck me, its proximity to me a consequence of randomness and chance. In a large city, the number of bricks is incalculable, an absurd abstraction, like infinity, the proverbial urban blades of grass. Yet each brick was presumably handled by a human, touched, lifted, laid, slathered, supported, ignored. Row upon row, building after building, block on block. Etc. The sheer numbers are staggering, and banal. Nothing profound about my thoughts, but they captivated me anyway. Brought back to the idea of boundaries, of how bricks and mortar both house and shield, I began thinking about the lives inside this building. I’ve long been fascinated by abandoned buildings, by the steadfast ways that nature reclaims space, and by the ghosts and hints of the lives that nature erases with brutal impartiality. I’ve also often wondered on the mingling of psychic space in inhabited apartments and homes: the narcissism in believing in the impossibility that another family — with their crowded, urgent lives, memories and photo albums, joy and dread — could equally live in, and make, a home in the house your family once left behind. Memories in the corners still — stacked, transparent layer on layer, or box on top of box. The faint echoes still of decades’ worth of voice and family noise.

According to Jim Naureckas’ great New York Songlines website, the building on 15th St, the back of which I’m looking at here, housed Allen Ginsberg from 1951 to 1952. Looking at the rear of the structure, though, I can’t be sure of its address; so maybe it’s where James Agee lived from 1939 to 1941, “above a bar whose jukebox played nothing but ‘Roll Out the Barrel’.” Or maybe it’s the building with “a funky roof.” I don’t know, I can’t tell from here. But I like all three possibilities. I wonder what that person whose silhouette I just glimpsed behind the window is thinking. And what the person a floor below him is thinking of me.