“Anyone who turns his prime attention onto himself will hardly ever find himself in the same state twice” (Montaigne). Which I why on days when I’m feeling the pull toward the petty confession, toward the shallow but no less human end of things, I turn to Lester Bangs. I don’t know that there’s a greater example of Montaigne’s “obedient servant of naive frankness.” Patricia Hampl writes of listening to Fats Domino at a freshman mixer, of the intimation of sex’s “heavier pleasure” there but denied her; Bangs heard sex and rock & roll too but he barreled right in, decorum be damned. Made a career of it, in fact. “New Year’s Eve,” originally published in 1979 in the Village Voice, is a rollicking, confessional piece of raw, funny autobiography, equal parts arrogant, sheepish, profane, and repentant. 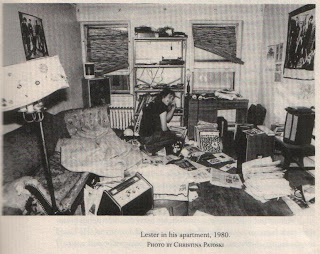 In other words, it’s a mess, and it’s terribly human. Bangs takes his reader along on several New Years’ escapades (the majority of which are actual, one or two are fictionalized and named so), blurting out his ill-mannered, adolescent behavior, especially where women, hard drugs, and rock & roll are involved, which is nearly every page. We become Bangs’ buddy at the bar, his leery friend at the suburban party, captive to the writer’s legendary prose energy. bull-dozing narratives, and album collection, nodding, wincing, laughing, rolling our eyes. What rescues the essay’s considerable lewdness (and meanness) from fatal self-indulgence is Bang’s acknowledgements of his own weaknesses, and the courage it takes to flay them so publicly. He’s an infamously honest writer, rarely to a fault, as his candid lookatthisshitIgotinto shines light in shameful corners, the personal geometry that we all embody at some point. (As a lark, read it alongside Charles Lamb’s “New Year’s Eve,” written a couple hundred years earlier, for two era’s tonally-different takes on the intimate and the personal.)

I turn to Bangs when I need inspiration to pave the way toward a little brutal self-interrogation. Montaigne again: “We are entirely made up of bits and pieces, woven together so diversely and so shapelessly that each one of them pulls its own way at every moment.”