An excerpt from my essay "The Hyphen," in The Rose Metal Press Field Guide to Prose Poetry:

I’d been mulling over a memory from school, an awful day when a bunch of my classmates threw stones at a girl named Mina because she was Iranian and Iran at that time held American hostages. In a brief prose piece I tried to write about the incident and whether or not I was implicated, worrying less about a beginning-middle-end then in circling the story though the indelible images I possessed of the day and era. I trusted that the common thread among them would be strong enough to bind together several pages, and it did. I began writing more essays, aligning myself with Montaigne’s exercise of “essay” in attempting to make sense of the tones, sensations, and imagery my imagination clung to about occasions, trivial and large. I often had no idea where I’d land. More jagged than arced, these prose pieces began to coalesce into something more substantial, visually and thematically, than my poems. The magnetic right margin, with which I no longer danced self-consciously, tugged and lengthened my lines, layering them. And the discursive element and conversational voice relieved me (mostly) of the lyric, abstract tone with which my more recent poems had whispered, affectedly, to my ear.
My prose natively took shape as block text, but arranged musically, the sentences growing or shrinking as Denise Levertov observed the phenomenon in organic poetry. I approached the page with the same impulse I did when writing poetry: less with a subject then with a note struck inside of myself. And so my essays naturally hyphenate, sitting astride music and discourse, cadence and idea(s). I’ll always lean toward the poetic with my feet firmly planted in the prosaic. 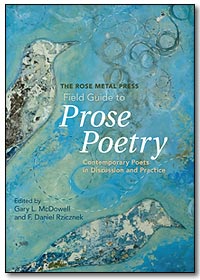