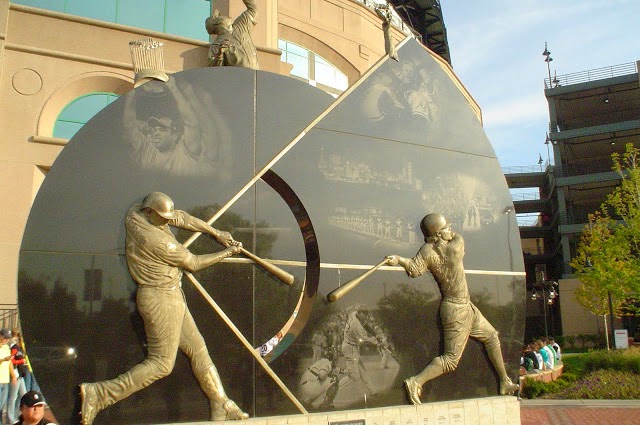 My dad has had two baseball teams taken from him. When he was in his late-20s his beloved Brooklyn Dodgers packed up and moved to far away Los Angeles; then when he was in his early-40s his Washington Senators relocated to Texas to become the Rangers. That last tragedy has been redressed somewhat with the arrival a couple of years ago of the Nationals in Washington D.C..

I didn’t have a local team to root for when I was growing up. After the Senators decamped to Texas, the nearest club for me was the Baltimore Orioles. My family, thus, were fans by proxy, a kind of necessity. I remember the old Memorial Stadium fondly, in that it was the first stadium where I watched professional baseball (I was brought to a Senators game or two; the droopy pennants in my parents’ house attest to this, though they were likely my older brothers’ and at any rate I don’t remember much from the games). Memorial was a pretty bland, ramshackle, lo-fi park, but I love this game and I liked the Orioles teams then: Ken Singleton; Al Bumbry; Jim Palmer; Brooks Robinson (who I asked to autograph my Topps card at Wheaton Plaza); Mark Belanger. By the time Cal Ripken, Jr. arrived on the scene I was a slightly less-crazed fan of baseball — but the O’s weren’t my team, anyway. My dad himself grumbled for years about this gloomy fact, even as he and my mom bought Orioles season tickets and made countless hour-plus treks up and down Route 95, fighting traffic and parking and the far more burdensome, unforgivable requirement of pulling for another’s team.

This existential crisis has trailed me. (I am not a homer, therefore I am not?) When I moved to Athens, Ohio I was, again, without a home team. Allegiances bore themselves out in the classrooms where my students would glare at each other beneath Reds and Indians hats, but who cared? Dibble, Schmibble—who did I have? I’d fallen away from the game a bit, the wide-eyed affection of a twelve-year old having been diluted (and for a few years, obliterated) by the fun and heartaches and arousing complications of college and grad school and various twenty-something melodramas. In the early 90s I started paying attention again, tuning in to baseball on WGN. I was happy to listen to Harry Carry and to vibe off of the Wrigley Field bleachers and the grimy Chicago sunshine. But the Sox grabbed me.

I admit that part of the attraction for me was buying happily into gritty South Side myth, the hard-scrabble, blue-collar, tough mentality that I grinningly accepted, and loved. Hey, and the Chess label was South Side, too — so many of my favorite records were cut at 2120 S. Michigan Ave. It was a groovy aligning of electric blues and baseball, Muddy and Luzinski, long shadows and black uniforms, irresistible (semi-true) history in a sprawling, railyard-grunting city toiling in the shadows of the well-to-do North Side. That’s what I wanted to believe, anyway. I followed the Big Hurt and Robin Ventura and Jack McDowell, all filtered through Hawk Harrelson, and grew, very quickly, to love the White Sox. 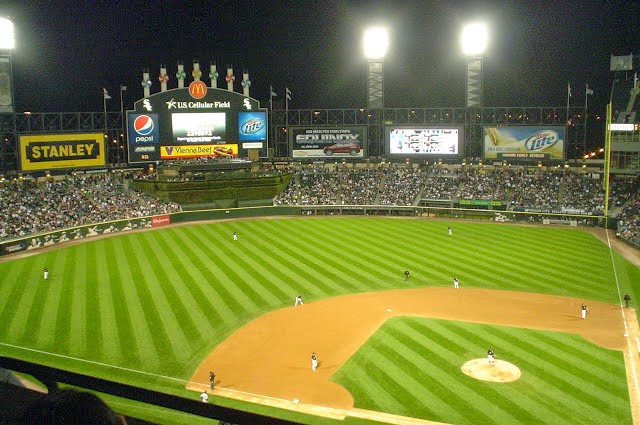 After we moved to DeKalb in the mid-90s, I was sixty miles away from the team. I still have no hometown baseball, but I’ve loved the White Sox—in minute detail, box score after box score, inning after inning, disappointment to elation back to disappointment—for many years now, and they are my team. Finally.

I might head east to DC this summer and catch a Nationals/White Sox game with my dad and brother, enjoying baseball a few miles from the house in which I was raised. As happy as I’ll be watching my dad beam and groan along with his home team (finally!), I’ll be pulling for the South Siders.

Cheers to allegiances and regional pining, and to the game that’s bigger than all of that. Opening Day is almost here.